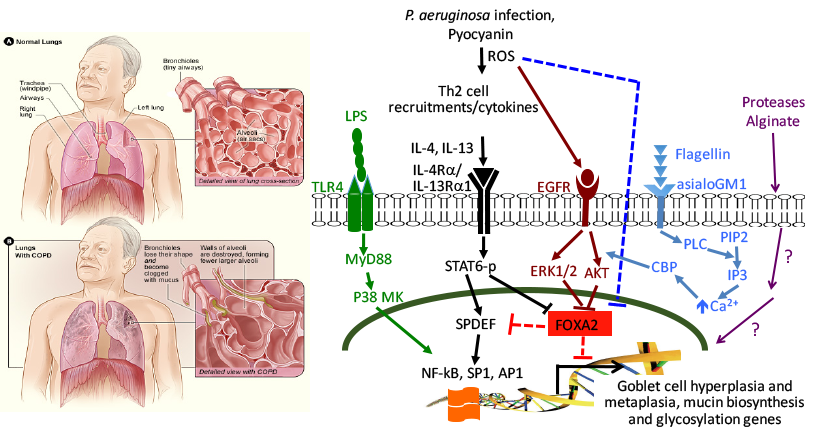 Pseudomonas aeruginosa is a major pathogen that infects COPD, CF, non-CF bronchiectasis lungs, resulting in high morbidity and mortality. We are examining the induction of goblet cell hyperplasia and metaplasia (GCHM), mucus biosynthesis and glycosylation, and emphysema by P. aeruginosa virulence. Among these, the redox-active pyocyanin inactivates FOXA2, a key transcriptional repressor of GCHM and mucin biosynthesis through induction of both STAT6-SPDEF and EFGR-AKT/ERK1/2 signaling. Additional signaling pathways are being examined. Also, we have expanded the study of FOXA2 inactivation by other respiratory pathogens. Finally, we are exploring whether FOXA2 could serve as a therapeutic target in diseased airways.

Interaction of P. aeruginosa with alveolar epithelium during lung infection 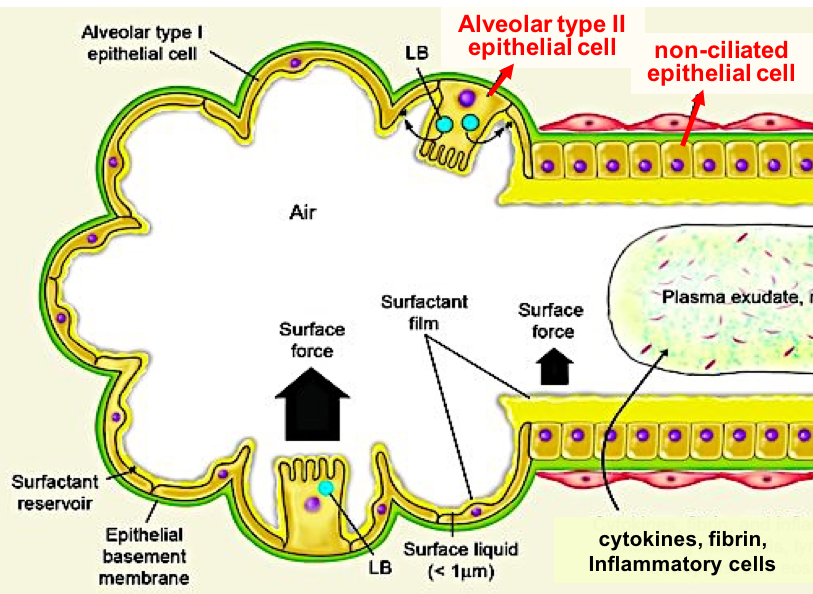 Pulmonary surfactant within the air sacs maintains airspace patency, as well as protects the lung against inhaled air laden with microbes, oxidants, pollutants and allergens. We and others have shown that surfactant protein-A (SP-A) and SP-D directly inhibit the proliferation of bacteria and fungi by increasing the permeability of the microbial cell membranes. We are characterizing the mechanisms employed by P. aeruginosa to counteract the SP-A and SP-D-mediated membrane permeability and opsonization. In addition, we are investigating how P. aeruginosa uses various quorum sensing regulated virulence factors to adapt to changes within alveolar epithelium environment. 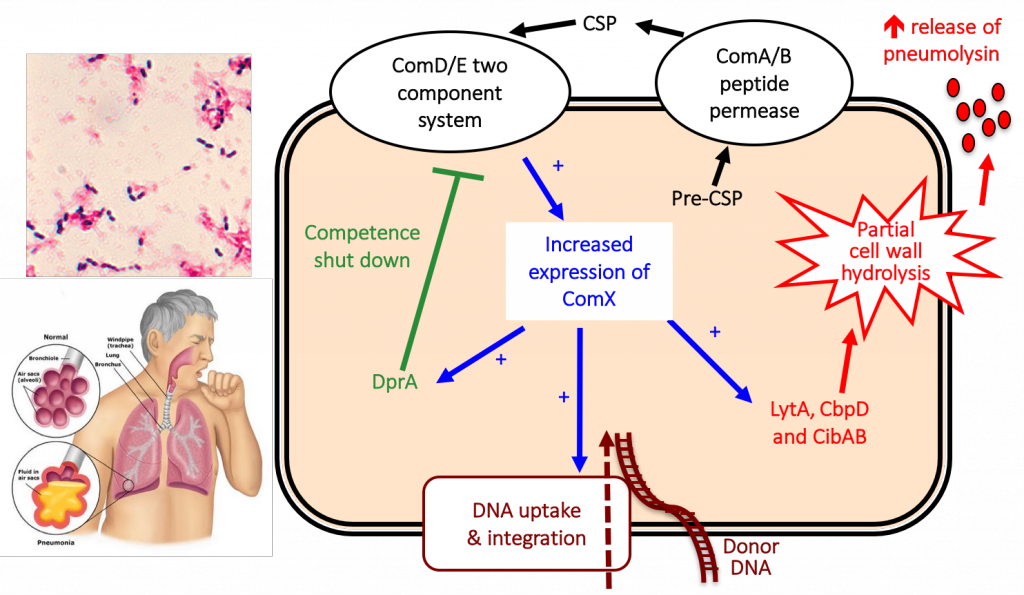 Image on the top left adapted from: https://www.cdc.gov/pneumococcal/about/photos.html

Pneumococcus causes pneumonia, bacteremia, otitis media, meningitis and post-sepsis cardiac complications. The pneumococcal competence system is required for genetic transformation. Interestingly, we and others have shown that the competence regulon is also required for virulence. Thus, inhibition of competence system will inhibit genetic transformation that could mediate the transfer of antibiotic resistance and virulence genes, as well as inhibiting infection. We have generated dominant-negative competence stimulating peptides that inhibit the development of competence, horizontal gene transfers and virulence. By systematic gene deletion analysis, we have identified novel virulence genes within competence regulon that are important for pneumonia and bacteremia infections, and may serve as novel drug targets.

Ask One of Our Experts!

We’re here to help answer your questions. Judicial matters can be complicated, our experts are on hand to help inform you of every aspect regarding your topic.