Part of the flagship campus of the University of Illinois, the College of Veterinary Medicine is home to three academic departments, a full-service hospital, and a diagnostic laboratory in Urbana as well as services in Chicago.

The College of Veterinary Medicine is uniquely qualified to address some of the world’s most critical problems. Our qualifications arise from the singular role of the veterinary profession, the only health profession trained in multispecies comparative medicine and able to elucidate key interconnections among human health, the environment, and agriculture. 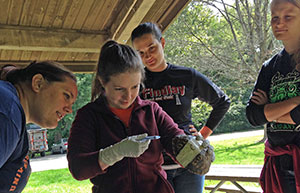 Veterinary students have many opportunities to participate in research at Illinois, including monitoring the health of free-living box turtles in the area.

Through our professional and graduate degree programs, we supply veterinary scientists who work to improve animal, human, and environmental health. Through our outreach programs we touch the lives of thousands of animals and their owners and provide direct services that place us on the frontline of key economic and public health issues in Illinois. Through our research expertise and facilities, we are making significant contributions to science and facilitating the translation of discoveries in the theoretical sciences into biomedical applications that benefit human and animal health.

The centerpiece of our college is the four-year doctor of veterinary medicine (DVM) degree program. An innovative integrated curriculum introduced in 2009 has attracted the interest of educators around the world and was commended by the veterinary accreditation site visit team in 2013.

The college has three service units: the Veterinary Teaching Hospital, the Veterinary Diagnostic Laboratory and the Medical District Veterinary Clinic in Chicago. They provide service to animal owners and veterinarians throughout the Midwest.

The college has a proud history of innovation and discovery. Many alumni and faculty have served as elected presidents of veterinary specialty organizations or as university presidents, including:

A selection of achievements and college milestones follows.