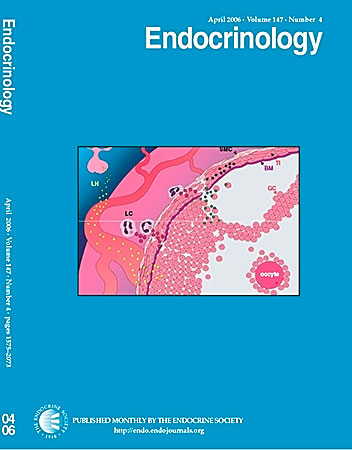 Endothelin-2, a short 21 amino-acid peptide, is a product of the highly conserved Edn2 gene that we hypothesize to be involved in both ovulation and angiogenesis of the corpus luteum. It was originally identified in porcine aortic endothelial cells as a potent vasoconstrictor, one of the most potent discovered. In the last 25 years, Endothelin-2 has been found to be expressed in a variety of tissues. While attempting to identify new genes that might be critical for ovulation using a microarray exploration and subsequent protein analysis, Endothelin-2 was found to be quite highly expressed in the granulosa cells of rodent ovaries at the time of ovulation. Endothelin-2 mRNA expression spikes for a two hour period just prior to the time ovulation, before returning to the essentially nonexistent basal levels that are otherwise present throughout the ovary, regardless of cycle.

As a potent vasoconstrictive peptide, Endothelin-2 has been hypothesized to act on myoid cells in the ovary that are present around the granulosa cells of mature follicles. Contraction caused by Endothelin-2 could be a direct final trigger for ovulation. Supporting this, ovaries treated with Endothelin-2 strongly contract ex vivo, while those treated with Endothelin Receptor antagonist drugs ovulate fewer oocytes. As an ongoing follow up approach, I am now utilizing a transgenic mouse model in which Endothelin Receptors are absent only from the smooth muscle cells of the ovary, in the expectation that these mice will have difficulty ovulating, allowing the effect of Endothelin-2 to be pinpointed to those contractile cells

The Ko Laboratory specializes in transgenic animal models, and a second approach to look at the role of Endothelin-2 in ovulation using a mouse that globally lacked the Edn2 gene expression was also used. As expected, these mice ovulated fewer oocytes than control wild type mice, highlighting the overall importance of Endothelin-2. Interestingly, these mice all also lacked corpora lutea even if they successfully ovulated. The corpus luteum is a highly vascular structure that forms after ovulation and is necessary for progesterone synthesis and pregnancy maintenance. I am now focusing on generating mice that lack the Edn2 gene only in the ovary, under the belief that Edn2 is necessary for vessel formation through VEGF induction, endothelial cell expansion, MMP secretion, and/or monocyte invasion. I hope that this exploration can eventually be applied to either improve human and food animal fertility, or in the generation of novel contraceptive approaches. Female reproductive senescence begins before birth and continues throughout a lifetime, culminating with menopause, the state of depletion of ovarian follicles. The female reproductive axis is unique in that it reaches a senescent state when other organs in the body are generally healthy. On average, women reach menopause at 50 years of age whereas their life expectancy is over 80 years. Hence, the majority of women will spend, or are spending, more than one-third of their life in a post-menopausal state. Epidemiological studies show that a late onset of menopause confers longevity and decelerates the appearance of much age-related morbidity, suggesting that delaying the onset of menopause will improve the health of aging women and therefore their quality of life. In this study, using animal models, we aim to develop an experimental procedure that will be conceptually applicable for delaying the natural onset of menopause in women. Once developed and successfully executed, this novel procedure may delay the onset of menopause by multiple years so that women may not experience menopause until they reach the age of 55, 60 or greater. Our project is based on the idea that by preserving ovarian tissues (cortices where most primordial follicles reside) at a young age when follicles are densely populated and then grafting this tissue back to her own ovary at an old age when follicles are sparsely populated, we will be able to increase the recipient’s follicle pool size. The increased follicular pool may therefore extend the functional life span of the ovary, resulting in a delay of menopausal onset. In this project, we aim to simulate human ovarian tissue grafting using well-established mouse menopausal models: naturally aging mice and 4-vinylcyclohexene diepoxide (VCD) injected mice. Briefly, young ovarian cortices will be transplanted to an older ovary, and we will determine whether the transplantation delays the onset of menopause of the recipient. Specifically, we will determine the effect of transplanting post-pubertal ovarian tissues to pre-, peri- and post-menopausal animals, and measure the on the onset of menopause. Our laboratory has successfully established an ovarian tissue transplantation protocol using the C57BL/6 strain of mice. Some studies in rodent models, however, have shown that the hypothalamus of a middle-aged female (when the ovary is functional) is less sensitive to preovulatory estradiol positive feedback stimulation, resulting in a reduction in the number of activated GnRH neurons and a delayed or attenuated secretion of LH from the pituitary. These observations may indicate that hypothalamic senescence may precede ovarian aging with the possibility that ovarian cortices may go through accelerated aging if transplanted to an older recipient. However, other studies suggest that ovarian aging itself is the predominant factor for the aging of reproductive axis and therefore the onset of menopause. In this study, we will use our ovary transplantation procedure to resolve these conflicting reports by measuring the aging rate of ovarian cortices when transplanted to different age groups of mice and the aging rate of the hypothalamus when varying age groups of mice receive ovarian cortices from different age groups of mice. Show is a microscopic image taken from an ovary that received an ovarian tissue graft that was taken from a green fluorescent mouse. 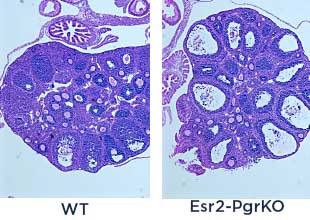 Luteinizing hormone (LH) is secreted from the pituitary and triggers ovulation. Progesterone is synthesized in the ovary upon stimulated by LH, and activates progesterone receptor (PGR) leading to ovulation. Meanwhile, LH also induce the expression of prostaglandin-endoperoxide synthase 2 (Ptgs2) gene,  then granulosa cells produce the inflammation trigger, prostaglandins via enzymatic activity of PTGS2. To understand the role of PGR in ovulation and ovulatory inflammation, I am utilizing molecular biological tools and genetically modified animal models including granulosa cell-specific Pgr knockdown mouse (Esr2-PgrKO).

Recently, I found that PTGS2 expression was potentially attenuated by PGR in the granulosa cells. Therefore, I hypothesize that PGR activation suppress cytokine productions, leukocyte recruiting and ovulatory inflammation via inhibiting PTGS2 expression. I will identify the inhibition mechanism of PGR on PTGS2 expression and anti-inflammatory role of PGR in preovulatory ovary.

Effect of DEHP on gonadal development

The main goal of my study is to determine the effects of environmental chemicals on gonadal and brain development in male mice. Phthalates are a family of synthetic chemicals that are widely used in medical, automotive and consumer products. Di-(2-ethylhexyl) phthalate (DEHP) is an endocrine disruptor that has anti-androgenic activity. Male CD-1 mice were prenatally exposed to DEHP by dosing their mother daily with 200 μg, 500 mg or 750 mg/kg or vehicle from gestation day 11 to birth. The impact of the exposure on their reproductive and memory were examined when they reached the ages of 8 to 22 months. As early as at the ages of 8 months, the 750 mg/kg/day DEHP group of mice exhibited significantly reduced fertility while other dosage groups and control mice did not. The same dose-dependent reduction of fertility continued until the age of 18 months. All DEHP-exposed group had lower serum testosterone and higher serum estradiol levels than the control mice. Histological evaluations showed that mice prenatally exposed to DEHP displayed a wide array of gonadal and epididymal abnormalities such as increased germ cell apoptosis, degenerative seminiferous tubules, oligozoospermia, asthenozoospermia, and teratozoospermia in comparison to age-matching control mice. Behavioral tests were performed at the ages of 16-17 months to examine the memory and anxiety level. Elevated plus maze test and open field test showed an increase in the anxiety behavior in DEHP treated mice compared to control. Novel object recognition test and Y-maze test found a significantly reduced recognition memory and spatial memory in DEHP-exposed mice. In addition, I will determine whether the potential impact of the exposure is transmitted to next generations via epigenetic passages. This study will eventually help developing a preventive measure to protect children from maternal exposure to environmental toxicants.

Conversion of an Esr1+ cell to Esr2+ cell during ovarian development 17β-estradiol (E2) is a steroid hormone that regulates a plethora of reproductive, metabolic, immunologic, cognitive, and skeletal functions. Two classical estrogen receptors, ESR1 (ERα) and ESR2 (ERβ) are responsible for the classical actions of E2 in mammalian species. In the ovary, ESR1 is localized to the surface epithelium and theca cells, whereas ESR2 is expressed in the granulosa cells. In previous studies, we have generated a transgenic mouse line that has an insertion of an enhanced Cre (iCre) recombinase in the exons of Esr1 and Esr2 gene, respectively. Esr1Cre mice can be used for deleting any floxed gene in the ESR1-expressing (Esr1+) cells, and Esr2Cre mice for excising genes in ESR2-expressing (Esr2+) cells. These novel transgenic mice are being used for lineage-tracing Esr1+ and Esr2+ cells and investigating unique roles that these estrogen receptors play in a single lineage. One interesting finding that we made is that Esr2+ granulosa cell seems to originate from cells that once expressed ESR1. I hypothesize that there is a molecular switch that convers Esr1+ cells to Esr2+ cells in developing ovary. In this project, 1) I will determine the temporal window when ESR1/ESR2 switching occurs, 2) the role of oocyte in granulosa cell lineage determination and 3) the mechanism of silencing Esr1 promoter during the transition of ESR1 to ESR2 granulosa cells. A discovery of the existence of a mechanism that converts ERa+ cells to ERb+ cells is expected to open-up a possibility of changing Esr1+ cells to Esr2+ cells.