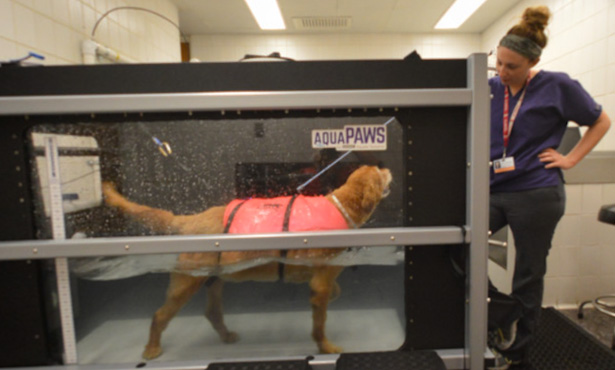 Wednesdays at the Veterinary Teaching Hospital are affectionately known as “Golden Wednesdays.”

“We have three to four golden retrievers that come in for therapy that day,” explains Kim Knap, a certified veterinary technician (CVT) and canine rehabilitation specialist at the hospital. “That’s their day. We see a lot of gray-faced goldens on Wednesdays, which we very much enjoy.” 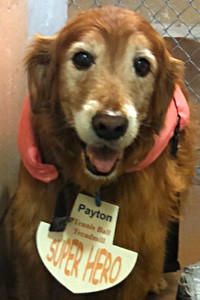 The retrievers range in age from seven to 14 years, making Payton Gorham, at 14, the senior citizen of the pack.

This grand old golden, named for the late Chicago Bears superstar Walter Payton—and sporting a leash bearing the name of Payton’s alma mater, Jackson State University in Jackson, Miss., to reinforce it—comes to the hospital every Wednesday accompanied by his owner, Rob Gorham, for a 25-minute water therapy session. It’s a practice the two have performed faithfully every week for the past two years.

“His hip problems were advancing,” explains Gorham, owner of a digital imagery company based in Champaign, Ill. “I used to walk him every day, probably a mile and a half, for the first 12 years of his life. But Payton’s poor hips are just shot.

“He started failing. He was down to where he couldn’t walk a block.”

Gorham says Payton’s veterinarian, Dr. Duane Dust, a Class of 1981 Illinois alumnus, suggested that Payton could benefit from the water therapy treatments administered by Knap and her team, and prescribed it for the dog. Memories may have come flooding back.

Ironically, Payton had been a “patient” in the hospital’s therapy tank a decade earlier.

“In 2004 a friend of ours was doing graduate work here from Purdue University,” Gorham explains. “She asked if we could put Payton in the pool so she could take photos in support of her master’s thesis. He wouldn’t do anything unless he could have a ball with him in the picture.” 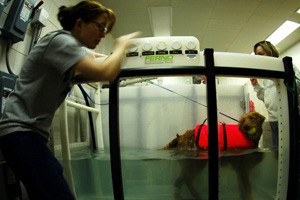 Knap says Payton still looks for his favorite plaything on occasion—“If you catch him on a good day, he’ll hold the ball,” she observes—but he appears far more focused on the restorative benefits of his weekly water trot.

“Water is really beneficial because the buoyancy supports about 70 to 80 percent of his weight at this level,” says Knap. “So he’s able to exercise for 25 minutes straight where he’s not usually able to do that on land, at least when we started. It keeps the muscles strong, and muscles are very important because they help support the joints that are abnormal.”

Payton walks on a moving treadmill submerged in water that is heated to increase circulation and ease pain.

Knap suspects virtually all dog breeds could benefit from water therapy. “They certainly can,” she says. “They have to have a disease process like arthritis or some type of an orthopedic condition in order to develop arthritis. Obviously if a dog lives to be 14 years old, the chances of it developing arthritis are pretty high.”

The process is usually the same for every patient. “We start out with very short frequent sessions and build up their exercise tolerance,” says Knap. “It’s really important to keep these guys moving. If they stop, they will lose the ability to do it pretty quickly. It’s kind of the same in people. It’s much easier to walk in water than it is on land, so there’s no concussion on his joints. In here it doesn’t hurt anywhere near as much.

“We try to coordinate the frequency of the sessions based on how long the effects last. So if Payton feels pretty good for five or six days after he’s been here, then he comes once a week. He’s a hard worker. It’s always our goal to try to minimize the number of times they need to be here.”

Knap says, “It’s not unusual for the owners to report a happier attitude at home, a little bit better mobility, a bit more involved and engaged in what’s going on, a little more mentally stimulated. All of those things are probably due to an adrenalin release and generally feeling better.”

That’s certainly the case at Payton’s place. “It’s been just phenomenal,” Gorham relates. “It was practically an overnight turnaround. Now we walk him about six blocks a day.

“Kim Knap and her team, these people are so spectacular. They clearly love the animals, and the animals appear to absolutely love the team, too. So it’s wonderful.”

His movement and energy renewed, Payton is ready to root again for his favorite. “Of course,” Gorham says, “he’s a Bears fan.”