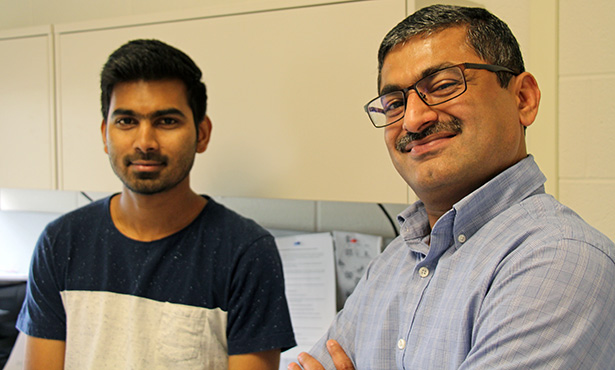 Findings may have broad translational potential

A study led by Som Nanjappa at the University of Illinois College of Veterinary Medicine identifies a cellular target that may improve efficacy of vaccines designed to protect immunocompromised individuals from potentially deadly opportunistic infections.

The study, recently published in the Journal of Immunology, demonstrates, using a mouse model, that a protein important in regulating immune response, called CBLB, can be targeted in combination with an inactivated vaccine to elicit immunity through a unique T cell pathway. This approach may lead to protective vaccines for immune-impaired patients, such as those undergoing chemotherapy, immunosuppressive therapy, or with immune deficiency.

While fungal pathogens rarely sicken healthy individuals, the incidence of fungal infections in people with HIV/AIDS or other immune deficiencies has risen sharply in recent years. This population is highly susceptible to fungal infections, resulting in as much as 70 percent mortality even when treated with antifungal medications.

“Because prevention is better than cure, the ideal solution would be to vaccinate immunocompromised individuals against such opportunistic infections,” said Dr. Nanjappa. Currently, however, there are no licensed fungal vaccines. Additionally, to be safe for use in immunocompromised patients, such a vaccine would need to be based on an inactivated rather than live pathogen. Yet inactivated vaccines stimulate a “weaker immune response.”

To address these obstacles for vaccine development, Dr. Nanjappa and his colleagues at the University of Illinois and at the University of Wisconsin-Madison sought targets that could be used for adjuvanticity of fungal vaccines. Casitas B–lymphoma-b (CBLB) is a critical negative regulator of T cell response. Targeting CBLB has been shown to help control chronic viral infections and tumors. This new paper reports on extensive analyses of the role of CBLB in CD8+ T cell immune responses to various live and inactivated vaccines in mouse models that had been depleted of CD4+ T cells.

Previous work by Nanjappa and colleagues showed, in a mouse model, that a live attenuated fungal vaccine can, in the absence of CD4+ T cells, stimulate CD8+ T cells (both type 1 and type 17) to take on some of the functions of CD4+ T cells and generate long-term immunity against fungal pathogens.

Data in the current published study support the premise that adjuvants targeting a negative regulator of T cell responses such as CBLB could provide long-lasting immunity against lethal fungal pathogens in a population deficient of CD4+ T cells. The study also suggested that adjuvants targeting CBLB for inactivated vaccines by a local route could also invigorate CD8+ T cell responses to existing viral infection.

These findings, in addition to CD4+ T cell deficiencies, may have broad translational potential for clinical applications, for a variety of immunocompromised conditions, from transplantation and chemotherapy to the immunosuppressive stages of pregnancy.

This study was supported by NIH-NIAID R21 to Dr. Nanjappa (at right in the photo above) and a graduate research assistantship to Dr. Srinivasu Mudalagiriyappa (at left) from the University of Illinois at Urbana-Champaign Department of Pathobiology.