I arrived at the conference during the weekend to assist with the pre-conference wet labs for AAFV with Nicole Nietlisbach, a veterinary student from the University of Wisconsin School of Veterinary Medicine. The first night Nicole and I went out to dinner with AAFV members from all over the world. It was great speaking with them about the differences and similarities in veterinary medicine around the globe and it opened up our eyes to the diversity that exists in our field.

The next day, the wet labs began. The first lab that Nicole and I assisted with on Sunday was the morning lab titled “Fish Handling, Clinical Procedures, and Sedation.” Nicole and I checked in the participants and ensured that the wet lab flowed smoothly. Towards the end of the lab, we also were able to go through the necropsy of a koi and practice clinical techniques such as sedation, venipuncture, performing gill, fin, and skin scrapes, and performing a fecal collection. We then helped transition the wet lab room to set up for the next wet lab by changing out the supplies. 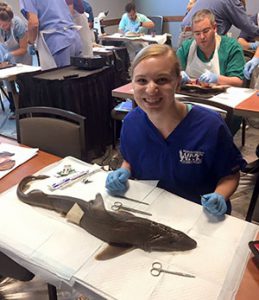 The afternoon wet lab was titled “Introduction to Sharks.” This lab began with a lecture on shark medicine, surgery, anatomy, and physiology. Then, the lab transitioned to the hands-on portion. The participants were given various shark cadaver species for necropsy. Nicole and I were given a dogfish shark cadaver and we performed a necropsy of the brain to show the lab participants what a shark brain looks like. It was actually really interesting to draw parallels between the brain of the shark to the brains of the dogs that we dissected as first-year students at our colleges.

After assisting with the clean-up of the lab, we then freshened up and traveled to the Dallas World Aquarium in downtown Dallas for the evening icebreaker session. The night was filled with animals, networking, and laughter. One of my favorite parts of the icebreaker was re-connecting with University of Illinois Vet Med grads that I had met as an undergraduate volunteer at the Wildlife Medical Clinic at Illinois. My peers and I also had a great time exploring the Dallas World Aquarium and seeing all of the animals on exhibit.

The next day was the New Member breakfast. I attended the breakfast with Allison Dianis, a fellow Illinois second-year student who was also attending the conference, and we learned more about what AAZV was and how to become further involved. After the breakfast, the scientific sessions began. I spent the day attending the AAFV scientific sessions, learning about novel techniques and research in the field of fish medicine.

After the scientific sessions, the other Illinois students and I attended the AAZV Student Reception. At this event, various institutions were set up at tables and students were able to go and speak with them about their various externship, internship, and residency opportunities. This night was one of my favorite nights of the conference because I was able to reconnect with professionals and students from other Colleges of Veterinary Medicine that I had met through participating in experiential learning activities in the past, and I was able to meet new professionals and students as well. I left the Student Reception feeling excited about the various opportunities in the field of zoo medicine. After the reception, Illinois students and alumni attending the conference went out to dinner. It was really fun to talk with the previous students about their career paths and how Illinois is similar and different compared to when they were students.

The last day that I attended the conference was Tuesday. I attended the scientific sessions in the morning and early afternoon, which covered primate medicine and aquatic animal medicine. Unfortunately, I had to head to the airport to go back to class in the late afternoon. However, we did take a group Illinois picture before I left. It was truly amazing how many current and past Illini were attending the conference.

Ultimately, I left my four days at the conference with a renewed passion and interest in the field of zoo medicine. Although attending my first AAZV and AAFV conferences was intimidating initially, I gained more knowledge, clinical skills, and connections from attending than I ever could have imagined. One of the biggest takeaways that I gained from this experience is that if you take the first step and put yourself out there, doors will open for you and lead to opportunity after opportunity. I look forward to attending more AAZV and AAFV conferences in the future, and I encourage my peers who have an interest in zoo or aquatic animal medicine to do the same.