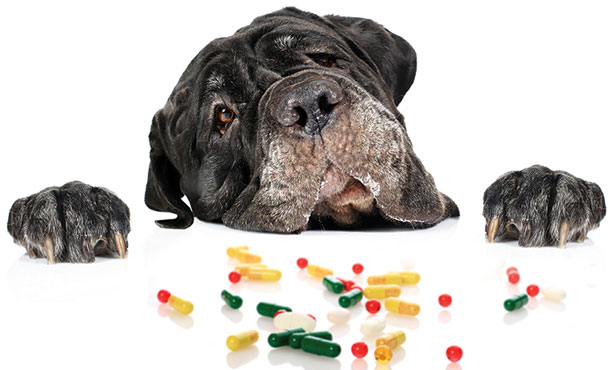 A two-year-old male, castrated Pomeranian-Shih Tzu mix, weighing 8.5 kg, was presented to the veterinarian 12 hours after suspected ingestion of over-the-counter vitamin D3 supplement capsules. The owner reported that she found a bottle of Nature’s Bounty Vitamin D chewed open and estimated that 90 to 100 capsules were missing, meaning the dog may have ingested up to 200,000 IU (5000 ug). The owner unsuccessfully attempted to induce emesis by administering oral hydrogen peroxide to the dog and brought the dog to her veterinarian the next morning.

On presentation, the dog’s initial physical examination was unremarkable with vital signs all within the normal reference range. The veterinarian administered 4.5 grams of activated charcoal (in a 45 mL slurry) by mouth and then blood was drawn for a serum chemistry profile and serum was immediately frozen for later evaluation of cholecalciferol concentration. At that time, all chemistry values were within normal limits except for the phosphorus, which was mildly decreased (4.4mg/dL, reference range: 5.1-10.4). Intralipid 20%, a 20-percent intravenous fat emulsion, was administered as a bolus dose of 1.5ml/kg given over 15 minutes and then followed with a constant rate infusion at a dose of 0.5ml/kg/min for 30 minutes. Additional serum samples were taken at 60 and 120 minutes post-completion of the lipid infusion. The samples were immediately frozen and shipped to the Michigan State University Diagnostic Center for Population and Animal Health for 25-hydroxyvitamin D (25,OH-D3) level analysis.

The patient was placed on intravenous 0.9% saline after collection of the final serum sample. After 24 hours the patient was discharged on a low-calcium prescription diet. The dog was returned 48 hours later for recheck biochemistry panel, which was unremarkable aside from an elevated total bilirubin of 2.2mg/dL (reference range: 0-0.9). Pre-lipid infusion serum 25,OH-D3 concentrations were above the reference range and decreased into the normal range post lipid infusion.

Since intravenous fluids were not started until after the final serum sample was collected, lipid therapy, which was the only intervention to decrease the serum concentration of vitamin D, is likely to be responsible for the decrease in this case.

Vitamin D deficiency has recently been associated with increased rates of many human diseases. The recommended daily allowance for adults, children, and infants has been significantly increased, and high-concentration vitamin D supplements are now widely available over the counter, increasing the potential for acute toxicosis in veterinary patients.

Vitamin D is present in nature in two active forms: vitamin D2 (ergocalciferol, found mostly in plant matter) and vitamin D3 (cholecalciferol, found in the soft tissue of mammals). Cholecalciferol is considered to be more potent than ergocalciferol, and is therefore 10 times more toxic. Both can be consumed and rapidly absorbed from the gastrointestinal system and then converted into the active metabolite 1,25-dihydroxycholecalciferol (calcitriol) via the kidneys. The highest concentrations of calcitriol are found in the serum 48 to 96 hours after vitamin D exposure.

Calcitriol, in turn, increases calcium absorption in the intestines, mobilizes calcium from the bone and increases calcium reabsorption from the kidneys resulting in a rise in the serum concentration of calcium and phosphorus. All forms of cholecalciferol are highly lipophilic, remaining in the fat stores within the body for long periods.

Vitamin D intoxication in veterinary patients is most commonly due to accidental ingestion of cholecalciferol-containing rodenticides or human medication and dietary supplements. The clinical signs of cholecalciferol toxicosis are reflective of the resulting hypercalcemia and hyperphosphatemia and their detrimental effects on the renal, central nervous, muscular, gastrointestinal, and cardiovascular systems. If left untreated, patients proceed into acute renal failure and metastatic soft tissue calcification. With large exposures, clinical signs are as soon as 12 to 72 hours after ingestion. Acute ingestion of cholecalciferol-containing products should be medically addressed quickly.

Note: This article is excerpted from a manuscript that has been accepted for publication in the Canadian Veterinary Journal.