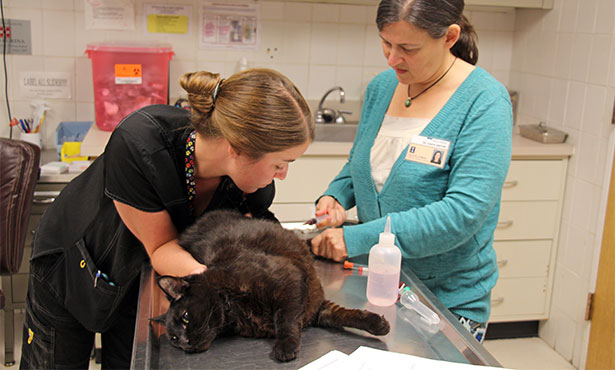 When your veterinarian runs a blood test to determine what’s ailing Fluffy, do you ever wonder what exactly all those numbers mean? A simple blood test provides a lot of information about your pet’s health status. Among other things, the blood test quantifies the white blood cells in dogs and cats, and this information can contribute to an accurate diagnosis of the patient.

“There are typically five types of white blood cells—neutrophils, lymphocytes, monocytes, eosinophils, and basophils—that we look at in a leukon, which is a white blood cell profile,” explains Dr. Anne Barger, a veterinary clinical pathologist at the University of Illinois College of Veterinary Medicine. “Knowing the levels of each of these cells in the body helps us to understand what type of process might be going on.”

Neutrophils are the most common white blood cell in dogs and cats. They are the body’s “first responders,” quickly arriving at the scene of an injury or infection. 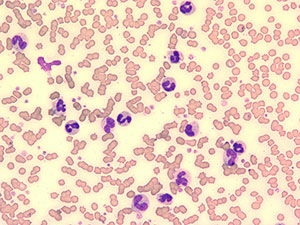 The purple cells are neutrophils in a blood sample from a patient with a significant inflammatory response. Above: At the University of Illinois Veterinary Teaching Hospital, oncologist Dr. Laura Garrett gets a blood sample from Boris the cat with the help of Tara Bailey, veterinary technician.

“Once neutrophils get to a site, they engulf any microorganisms they find and use specialized enzymes and oxygen radicals to kill them,” Dr. Barger says.

These cells also release signals to call other white blood cells and healing agents to a site of inflammation.

“An increase in the number of neutrophils, called neutrophilia, may suggest an inflammatory response,” says Dr. Barger.

This finding would prompt your veterinarian to investigate further to find the cause of the inflammation, which could be anything from bacterial pneumonia to a fungal infection, such as blastomycoses.

Lymphocytes, the second most common white blood cell in the body, are important for immune response. Lymphocytes are further categorized as T cells or B cells, and both types of lymphocytes are triggered into action when they encounter antigens, which are specific proteins on the surface of an invading microorganism.

“T cells control the immune response at the cellular level by helping to activate other immune cells,” says Dr. Barger. “B cells produce antibodies in response to antigens. Because these antibodies are released into fluids in the body rather than acting at the level of the cell, B cells are part of humoral, not cellular, immunity.

“When there is lymphocytosis, which is an increased number of lymphocytes, it could mean there is an immune response, possibly secondary to vaccination or it may indicate a fear or excitement response,” Dr. Barger notes.

Monocytes are often found in higher numbers during a stress response and also during inflammation. They are involved in the immune response and remove dead and damaged cells as well as microorganisms.

Eosinophils are a type of white blood cell that are particularly involved with defense against parasites, such as heartworms, roundworms, and hookworms, as well as playing a role in allergic reactions.

“Eosinophils are increased especially during hypersensitivity responses. For example, when the skin reacts to something that an animal is allergic to, eosinophils will be present in increased numbers,” Dr. Barger says.

Basophils are similar to eosinophils but are present in much smaller quantities. They would also increase during an allergic or parasitic response.

Combined with the other information the blood panel can provide, the white blood cell count is an invaluable diagnostic tool for evaluating your pet’s health status.