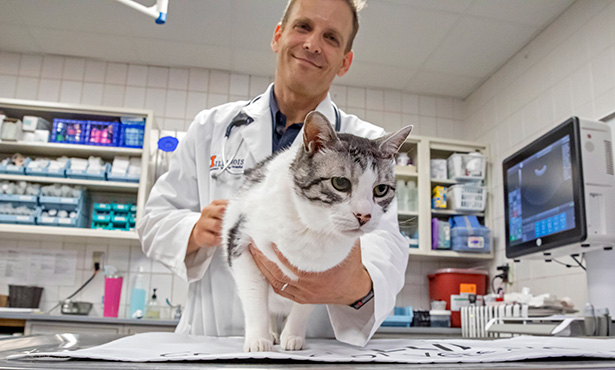 Urinary tract disorders are relatively common in cats, according to Dr. Arnon Gal, a veterinarian who specializes in small animal internal medicine at the University of Illinois Veterinary Teaching Hospital in Urbana. But unlike urinary tract infections in people, in cats these problems are not usually caused by bacteria.

“Generally speaking, infectious agents such as bacteria are infrequent in urinary tract disease in cats,” says Dr. Gal. Instead, the problem in cats is usually stress induced.

Inflammation of the Bladder

Commonly referred to as a urinary tract infection, this problem in cats is more properly called “idiopathic cystitis” in veterinary terminology. “Cystitis” just means inflammation of the bladder, while “idiopathic” means the problem arises spontaneously and without a known cause.

Inflammation is a useful aspect of the body’s immune response, serving to increase blood flow to an injured or infected area to facilitate healing. In the case of cats with urinary tract disease, however, sensory neurons trigger the inflammation of the bladder not because of infection or injury but in response to stress.

According to Dr. Gal, clinical signs of a urinary tract disorder in cats include, but are not limited to, frequent urination, straining to urinate, and the presence of blood in the urine. Male cats are more likely than female cats to have this problem.

Since idiopathic cystitis isn’t caused by an infectious agent, other animals in the household can’t catch the disease. By the same token, the problem can’t be treated with antibiotics or other medications. Luckily, there are effective strategies for reducing the number of flare ups in a cat.

Behavioral enrichment can include things as simple as more toys that allow for the cat to engage in “hunting” activities. This can be beneficial for your cat’s health and can actually prevent idiopathic cystitis. Pheromonal therapy includes the addition of pheromones to a cat’s environment. These can come in various forms, such as wipes, sprays, and plug-in diffusers, and are used to relieve stress in cats. Dietary modifications would help by diluting the urine. Ways do this would be to feed wet food, or by adding more water bowls throughout the house.

“Because stress plays an important role in the origin of this problem, it is important to reduce stresses related to the litter box as much as possible,” says Dr. Gal. “Avoid placing litter boxes in high traffic areas or where there is a lot of noise.”

Dr. Gal also warns against litter with scents. “The scent of the litter in the box may stress some cats, so choose litter without a scent.”

It’s important to address urinary tract disorders in cats because of the other health consequences of stress-related disease. If the problem is ignored in male cats, due to their anatomy a potentially lethal blockage can occur. Because idiopathic cystitis can cause crystals, the narrow urethra of male cats can get blocked by crystals being lodged in the tube. If this problem is not addressed, it can become deadly to the cat.

“This is a multi-systemic disorder in which the urinary system is just one aspect that is affected,” explains Dr. Gal. “These cats have gastrointestinal and behavior problems as well.”

The stress causes numerous problems, so to have a happy, healthy cat, be sure to address possible behavioral or environmental stressors.

If you have any questions or concerns about a possible urinary tract infection in your cat, contact your local veterinarian.