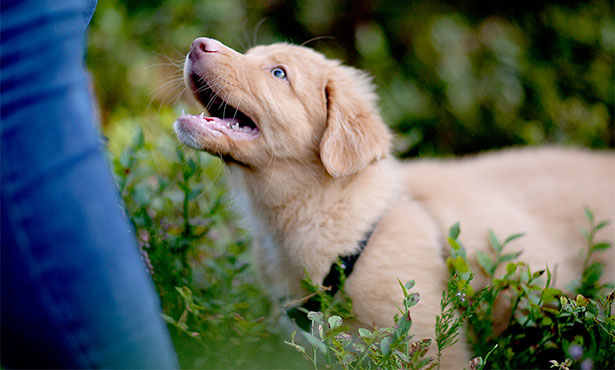 Check pets for ticks after every walk

If your pet brings home a tiny hitchhiker clinging to its fur after a romp in the woods this summer, don’t panic. Although ticks can transmit many different diseases to both humans and pets, including the much-feared Lyme disease, prompt and proper tick removal will significantly decrease the likelihood of infection.

Dr. Allan Paul is a professor at the University of Illinois College of Veterinary Medicine who specializes in parasitology, which is the study of parasites. Over the years, he certainly has heard his fair share of interesting old wives’ tales about how to remove a tick. Contrary to popular belief, “burning a tick with a hot match is not a good method of removal,” says Dr. Paul. Doing so actually makes the parasite expel its contents back into the animal and increase the likelihood of the spread of disease. An electron microscope image of a tick’s mouth and head.

For all the perfectly manicured ladies out there, it’s also not recommended to grab your bottle of finger nail polish at the first sign of a tick either. According to Dr. Paul, “acetone makes the tick more brittle, so when you do try to remove it the tick shatters.” Tiny pieces of tick all over your pet isn’t the best-case scenario, especially since that makes disease transmission more likely.

Although your grandmother may advise you to smother a tick with Vaseline, the only thing that may do is to create a slippery pet. Once a tick attaches to an animal, it buries its head under the surface of the skin. In essence, the tick has already suffocated itself, so covering it with any type of oil won’t help.

There is one method that Dr. Paul recommends. “The best way to remove a tick is to grab it as close to the skin as possible with a pair of tweezers,” he explains. With a firm and gentle pull you should be able to easily remove the majority of the parasite.

If you see a little black dot left in the area where the tick attached, don’t worry. “If the head gets left in, it’s not a big problem,” says Dr. Paul. Ticks are able to cement themselves into the skin of the pet, so removing their head can be difficult. In most cases, the body will take care of this parasitic souvenir on its own.

The best thing you can do for your pet is to get into the habit of checking it for ticks after every walk. Although it may be tempting, do not use any human tick and mosquito repellents on your pet. There are many different products available for tick control on pets.  Consult with your veterinarian which product would be best for your pet

It is important to note that ticks can transmit severe disease to both man and animal. Cytauxzoon felis, which can be fatal in cats, is transmitted via one tick bite. Rocky Mountain spotted fever is also a tick-borne disease that infects dogs and humans. The Centers for Disease Control and Prevention reports that the incidence of Rocky Mountain spotted fever in humans has trended upward since 2000, but the death rate in humans has fallen and has remained at <1 percent of infections since 2001.

A swift squeeze of the tweezers, and a gentle pull, should go a long way to keeping your pet healthy. If you think you or your animal are becoming sick because of a tick bite, contact your local health care professional or veterinarian.

Photo credit: Taken by Pål-Kristian Hamre and used under a Creative Commons license.