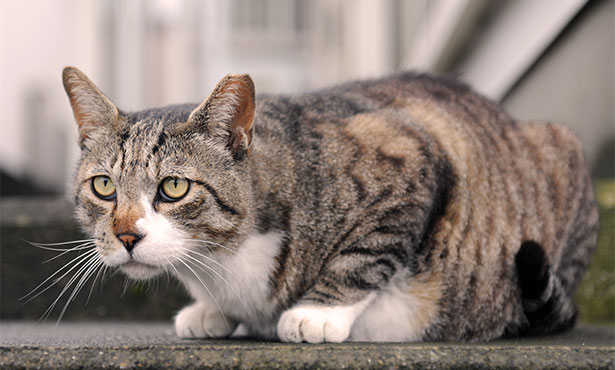 It may seem like a harmless, if disgusting, remnant of your pet’s predator instinct when your cat—or maybe your very stealthy dog—presents you with its latest kill. The truth is, though, pet-wildlife interactions can be dangerous to both parties and have serious consequences for the conservation of species.

“According to a study published in the journal Nature, domestic cats in the United States kill somewhere between 1.3 billion and 4 billion birds a year, not to mention billions of rabbits, squirrels, and other wildlife,” says Dr. Nichole Rosenhagen of the University of Illinois College of Veterinary Medicine in Urbana. “Cats have contributed to the extinction of multiple wildlife species.”

In the six years she has worked at the college’s Wildlife Medical Clinic, Dr. Rosenhagen has cared for countless wild animals attacked by pets.

“Pets often attack small mammals and birds. Fledglings, which are young birds just learning to fly, are especially vulnerable to attack at this stage of their lives, when they spend time on the ground,” Dr. Rosenhagen explains.

“Owners need to understand that their pets are predators by nature. They hunt because they their instinct tells them to, not because they are hungry,” she says.

“For wildlife, an attack is a horrifically terrifying experience. Often these animals die, but even the ones who are brought to a clinic for care face a scary, painful recovery made more difficult by the stress of being in captivity. Small wounds are often fatal because the saliva in the mouth of the pet introduces foreign bacteria.”

So what do you do if you catch your pet going after a wild animal or encounter an injured animal?

Dr. Rosenhagen advises calling the Wildlife Medical Clinic immediately for guidance. “Even if you aren’t in the Champaign-Urbana area, the wildlife clinic has comprehensive lists of licensed wildlife rehabilitators and can advise you on what to do,” she says.

The Illinois Department of Natural Resources and the website of the National Wildlife Rehabilitators Association provide similar contact information.

“In the meantime, if you can safely catch the animal and get it away from the pet, put it in a box and keep it dark and quiet. Do not try to feed it, refrain from photo ops, and under no circumstances should you give it any pet or human medications. Even many basic pain meds are very toxic to animals,” Dr. Rosenhagen says.

Once the injured animal reaches the Wildlife Medical Clinic, trained veterinary students will give it a complete examination to evaluate its chances of survival and ability to be released after being recovered. Animals that have been attacked will be put on antibiotics because of the high chance of infection, regardless of the severity of the injuries.

Unfortunately, many attack victims do not survive. They die or are euthanized because their injuries are too severe. For this reason, preventing pets from attacking wildlife is so important.

Ideally, cats will be kept indoors and dogs will be leashed or supervised when there is a chance they may encounter wildlife.

“Indoor cats live longer and are much less likely to get attacked or injured themselves,” Dr. Rosenhagen adds.

Last but not least, preventing interactions between pets and wildlife helps protect you and your pet from disease. “Pets can contract and transfer dangerous diseases, including tularemia and rabies, that kill pets and people,” she says.

If you have any other questions, please contact the University of Illinois Wildlife Medical Clinic.