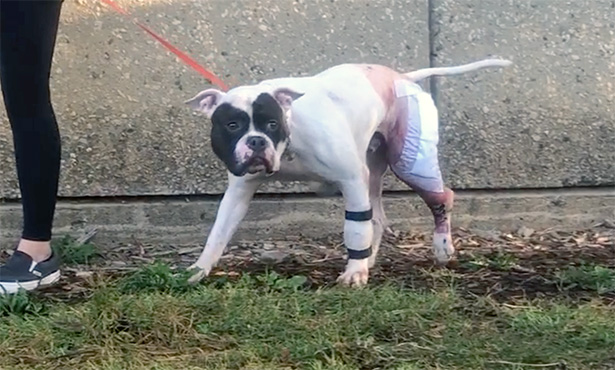 Dr. Danielle Marturello, a clinical assistant professor of orthopedic surgery, brought an innovative option for fracture repair with her when she recently joined the University of Illinois College of Veterinary Medicine faculty.

Deuces, a two-year-old male pit bull, came to the Veterinary Teaching Hospital in Urbana after being hit by a truck. Deuces was not

putting any weight on his left hindlimb, had bruises and abrasions from the collision, but was otherwise healthy and alert.

“Deuces first saw his primary veterinarian, who stabilized the dog’s condition and determined that his femur, a long bone of the hind limb, was broken. Then Deuces was referred to us for an orthopedic work-up to determine the best course of treatment for the fracture,” Dr. Marturello explains.

“When considering what method will be best for the patient, we want to preserve the structure and integrity of the bone, muscle, and blood vessels while providing a stable construct during the healing process,” Dr. Marturello notes. “We have many options available, and we choose the best option for the individual case and animal.” 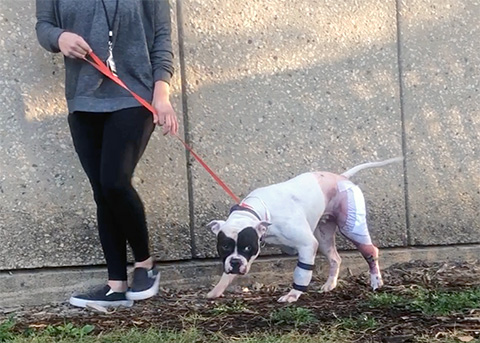 Click to watch a video of Deuces walking just two days after his fracture repair surgery.

One traditional option for some long bone fractures is a cast or splint, which is placed to keep the break stable until the bone heals. For this technique, it is important to stabilize the joint above and below the break. Because of the location of Deuces’ fracture, a cast was not an option.

Another traditional repair is a pin placed in the medullary canal (center of the bone) and plate placed along the femoral shaft. The concern with this option is that the pin can migrate causing nerve damage.

“Deuces’ fracture was the perfect situation in which to use an interlocking nail, also called the I-Loc, to stabilize the fracture,” says Dr. Marturello.

“During my residency at Michigan State University, I trained under Dr. Loic Dejardin, who developed the I-Loc system,” Dr. Marturello explains. “The I-Loc is a newer implant that adds a lot of stability to the limb, and we have had excellent results when using it to treat veterinary trauma cases.” An image from the OrthoView software used to determine the correct nail size for Deuces’ fracture.

The I-Loc is a large intramedullary rod that has four threaded holes, two at the top and two at the bottom. Bolts are threaded crosswise through those holes to keep the nail in place.

Special software, called OrthoView, is used to determine the correct I-Loc size for each patient. Because the injured limb’s bone is oftentimes in several pieces, the healthy leg is typically used for surgical planning. Dr. Marturello and her resident Dr. Allison Putterman determined the correct size for Deuces, and the nail was then overnighted to the hospital for surgery the next day.

“The I-Loc is placed within the medullary canal, which comprises the center of the bone and is responsible for bone marrow storage. Bolts are placed at both ends of the I-Loc, traversing the width of the entire bone in order to stabilize the nail,” Dr. Marturello says.

When the more conventional plate option is chosen to repair a break, there is a possibility that the plate’s strength could be severely compromised, and healing could be impaired by the bending forces that come into play when the animal walks on the limb. If a pin is added, this risk is mitigated, but pin migration is of concern. However, these circumstances do not arise with the I-Loc because it is protected from bending forces by its location within the medullary canal and is locked into the bone by the bolts.

“Another nice feature of the I-Loc is that it does not typically need to be removed.” Dr. Marturello says. In a small number of cases, infection occurs and the I-Loc must be removed. After Deuces’ surgery, his owners had to restrict exercise while he was healing. Dr. Marturello allowed 10-minute leash walks and also advised having Deuces wear an e-collar to prevent licking at his incision site. She also prescribed antibiotics to address any infection that may have been present from the initial injury.

“Within two days of surgery, Deuces was up and walking, so he did not need rehabilitation at that time,” Dr. Marturello says. Four weeks after his surgery, when Deuces came for a recheck, he was healing well and doing great at home, walking with only a very mild lameness.

“I was incredibly excited to bring my experience with the I-Loc to Illinois to expand the fracture repair options available to our surgeons,” Dr. Marturello explains. “The I-Loc has a sturdy construction, allows for faster healing, and is very versatile, able to be used in species from canine and feline to bovine.”

If you have any questions about orthopedic surgery, contact your local veterinarian.