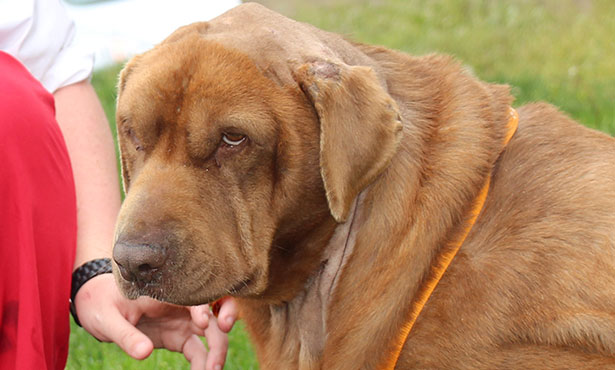 Hypothyroidism can be managed, but not cured

In April 2016, a three-year-old dog named Bear was brought to the University of Illinois Veterinary Teaching Hospital with abusive injuries. In addition to the obvious injuries Bear bore—an open wound on his back leg, skin ulcers, and a jawbone fractured by a bullet—the dog was diagnosed with a life-threatening endocrine disorder called hypothyroidism. 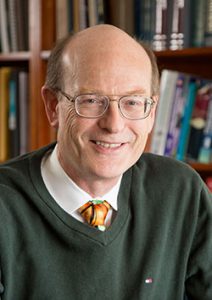 Dr. Duncan Ferguson recently retired after 10 years as professor and head of the Department of Comparative Biosciences.

“I saw Bear’s face in the ICU and could see he had the ‘tragic’ expression of a dog with profound hypothyroidism,” says Dr. Duncan Ferguson, a veterinarian with expertise in clinical endocrinology and pharmacology. Dr. Ferguson, who recently retired after 10 years as professor and department head at the University of Illinois College of Veterinary Medicine in Urbana, consulted on the care for Bear’s hypothyroidism.

“This tragic expression is a classic sign of myxedema, which is the swelling of skin and underlying tissues leading to a saggy face,” explains Dr. Ferguson. “Myxedema is caused by hypothyroidism. It is a condition leading to very slow metabolism, and if followed by another severe illness or if the animal is put under anesthesia without treatment, it can lead to a coma or very slow recovery.”

Although the severity of hypothyroidism in Bear’s case is rarely seen, this condition is the most common endocrine disease in dogs. The body’s endocrine system produces hormones that control energy usage, growth and development, and many other functions. The thyroid gland is part of this system. It takes in iodine and produces two hormones, called T3 and T4, that regulate the body’s metabolism and control the amount of energy the body’s cells are producing.

Hypothyroidism occurs when the thyroid is unable to produce enough T3 and T4 to circulate through the body.

The first sign of hypothyroidism is typically hair loss, especially on the dog’s flanks, because this area is particularly sensitive to thyroid hormone levels. Bear showed this abnormality.

As the disease progresses, the dog begins to show signs of weakness and lethargy. The heart rate may slow down, and body temperature may drop. Mental dullness and obesity despite normal or increased appetite are also seen. In short, the body is starting to fail because it is not being supplied with enough energy.

Other endocrine disorders, such as Cushing’s syndrome, may bring about similar signs, but generally occur in older dogs, according to Dr. Ferguson. Young dogs with skin abnormalities are more likely to have a sex hormone imbalance than to have hypothyroidism.

A diagnosis of hypothyroidism is most typical in dogs aged 4 to 9 years. Both males and females can get it. Labrador retrievers, English setters, and Doberman pinschers are breeds with the highest incidence of hypothyroidism; it is seen less frequently in tiny breed dogs.

Unfortunately, hypothyroidism is a lifelong disease because the thyroid gland cannot regenerate and repair itself properly. Hypothyroidism is also genetic, so breeding dogs with the disease is not recommended.

What exactly causes hypothyroidism? Very rarely, this disease can be caused by an iodine deficiency. Iodine is used by the thyroid to make T3 and T4. Because most commercial pet foods include three to five times the minimum iodine requirement for dogs, few dogs develop iodine deficiency.

Dr. Ferguson says research has shown that its primary cause is lymphocytic thyroiditis, an autoimmune disease that causes inflammation and destruction of the thyroid gland. Basically, the body’s immune system mistakes the thyroid gland for a dangerous invader and starts to attack it. Most of the time, lymphocytic thyroiditis goes unnoticed in dogs until the symptoms of hypothyroidism appear.

“A new test has been developed to detect thyroiditis in dogs,” says Dr. Ferguson. “This test has the potential to allow owners to know early on whether or not their dog is at risk of hypothyroidism, before the disease has progressed.” 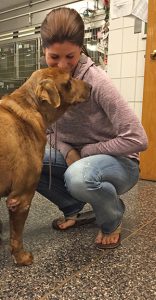 Given the wide range of years in which dogs can develop hypothyroidism, owners of breeding dogs are recommended to test their dog once every year or two during the years of peak incidence. Since the genetic basis of the disease is complex and still being unraveled, there is not yet a way to eliminate the disease. The blood test for thyroiditis is mainly used as a tool for breeders to know if their dogs have a high chance of hypothyroidism and therefore are not suitable to breed.

Although there is no cure, treatment is usually straightforward and successful with appropriate doses of levothyroxine, a synthetic T4. Along with fluid therapy and other medications initially, Bear was prescribed levothyroxine to manage his hypothyroidism. Thankfully, his hypothyroidism was brought under control, his other injuries were resolved, and he has found a new safe and loving home.

For more information about hypothyroidism in dogs, please consult your local veterinarian.