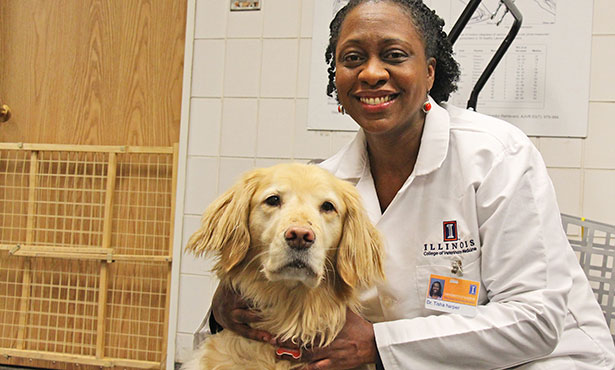 Dogs young and old, big and small may suffer from hip dysplasia.

Fortunately, a range of treatment options is available to help pets stay mobile and pain-free.

“The hip is a ball and socket joint. Hip dysplasia is a condition in which the ball—a protrusion at the top of the femur, or thigh bone—does not fit together well with the socket in the hip, called the acetabulum, and there is looseness or laxity in the hip,” explains Dr. Tisha Harper, a board-certified veterinary surgeon at the University of Illinois Veterinary Teaching Hospital in Urbana. Dr. Harper has additional training in orthopedic surgery and canine rehabilitation.

Heredity is a major factor in the abnormal development of the hip joint. The femoral head may be misshapen or the acetabulum may not be very deep and may be flattened or more “saucer shaped,” thus not allowing the femoral head to seat well.

Hip dysplasia is commonly seen in large and giant breed dogs, including Rottweilers, German shepherds, Labrador retrievers, and golden retrievers. It can also be seen in bulldogs and pit bulls.


The goal of both of these procedures is to eliminate the pain associated with hip dysplasia, thus improving quality of life and eliminating the need for continuous pain medication.

According to Dr. Harper, puppies with hip dysplasia may show signs of the problem, such as unwillingness to play or taking frequent rests during play; hopping like a rabbit—a response to the pain they feel when flexing and extending the hip; difficulty climbing stairs; and reluctance to jump onto furniture or into a vehicle.

However, it’s also possible that young dogs with hip dysplasia will not show signs of pain. According to the American College of Veterinary Surgeons, about three-quarters of young dogs with hip dysplasia can function pain-free for many years without treatment.
In older dogs, an owner may notice stiffness of the hind limbs when the dog is walking, muscle wasting in the hind limbs, and slowness to rise from a sitting or lying position. Hip dysplasia leads to arthritis in the hips as the dog ages.

“To test for laxity in the hip, the veterinarian will perform an Ortolani test, which involves manipulating the hip to see if the femoral head can be displaced out of the acetabulum,” says Dr. Harper. “As the veterinarian continues to manipulate the limb, the femoral head will pop back into the acetabulum. The popping sound or feel indicates a positive Ortolani test and means that there is laxity in the hip.”

Not all dogs with hip dysplasia will have a positive Ortolani test, so the veterinarian will also take X-rays to examine the shape of the femoral head and the acetabulum and to look for evidence of arthritis in the hip.

Hip dysplasia can be treated either medically or surgically. The treatment of choice will depend on age, severity of clinical signs, presence or absence of other diseases, and financial constraints of the owner. According to Dr. Harper, most pets are initially treated medically with rest, physical therapy, pain medication, and weight management.

The most common surgical treatments are the femoral head and neck ostectomy and total hip replacement.

The first of these involves surgically removing the femoral head and neck, thus eliminating rubbing of an abnormally shaped femoral head on the acetabulum. The surrounding musculature will take on the function of transmitting forces from the leg to the pelvis and spine. Post-operatively, great attention is paid to maintaining range of motion of the hip to prevent the formation of scar tissue that would limit limb function.

“The goal of both of these procedures is to eliminate the pain associated with hip dysplasia, thus improving quality of life and eliminating the need for continuous pain medication,” says Dr. Harper.

For more information about hip dysplasia, speak with your veterinarian.