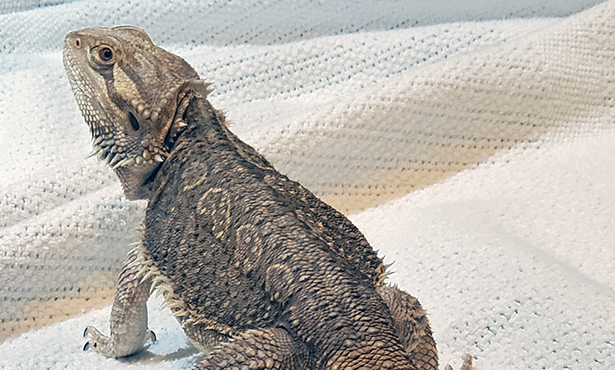 When the standard treatment for a fungal infection wasn’t working for Frankie, a bearded dragon, the experts at the University of Illinois College of Veterinary Medicine were able to help.

Frankie was only 8 weeks old when her pet parents noticed a dark spot on her back. After new and larger spots started to appear, Frankie visited her local veterinarian. A fungal culture yielded a diagnosis of Nannizziopsis guarroi, a pathogen that infects the skin and sometimes the internal organs of lizards. 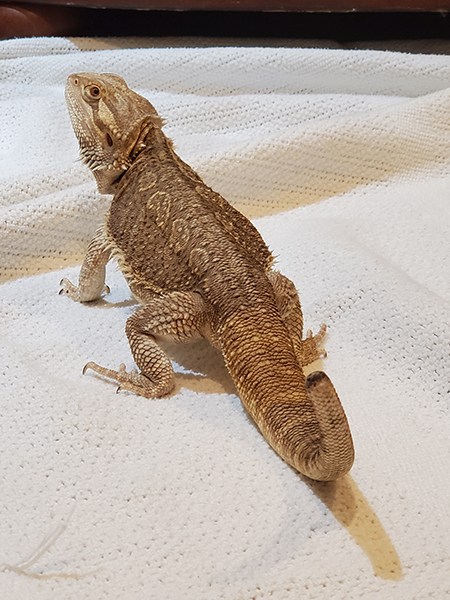 After months of treatment with a new medicine, Frankie’s fungal infection cleared and she is doing well. [Photo courtesy of Frankie’s family.]

Frankie’s veterinarian started her on voriconazole, a medication used for both people and lizards with fungal infections. Although it is currently the treatment of choice for lizards with Nannizziopsis guarroi, this drug is not 100% effective in treating all cases, and Frankie’s condition started to decline.

“The toxicity of the medicine was taking a toll on Frankie’s health,” says her owner. “I thought we would lose her.” Her veterinarian then suggested that Frankie should be seen by the zoological medicine service, located in the new Veterinary Medicine South Clinic at the University of Illinois.

Dr. Krista Keller, who heads the service and is a board-certified specialist in zoological medicine, was Frankie’s doctor. The classical appearance of a N. guarroi infection is a crusty yellow lesion, and it is sometimes called “yellow fungus disease.” However, Dr. Keller says that often a bearded dragon with this infection, like Frankie, will have dark crusty lesions rather than yellow ones.

No one knows for sure how lizards become infected with this fungus, but it appears to be contagious. Most of the cases treated at the University of Illinois hospital have involved lizards that were recently acquired and had been in contact with other reptiles, either at a pet store or a breeding facility.

At Frankie’s first visit with Dr. Keller, her family members reported that Frankie had not been eating well and was more quiet than normal. “A healthy bearded dragon is typically quite bright, interactive with their environment, and they are voracious eaters,” says Dr. Keller. It was obvious that Frankie’s family had a special bond with her and recognized that something was wrong.

Experts at the University of Illinois Wildlife Epidemiology Laboratory, which is co-directed by Dr. Keller, had conducted research that showed the fungus troubling Frankie could be treated with terbinafine, another antifungal medication that acts to kill fungus in a different way than voriconazole. This information allowed them to find a dose that was effective and safe to use in a bearded dragon.

“I’m excited about current research in our lab investigating safer and more efficacious treatments against N. guarroi. Frankie’s therapy was based upon ongoing research in our laboratory, and the results from her case are very promising for future therapies,” says Dr. Keller.

Like most fungal infections, Frankie’s infection needed long-term treatment. Frankie received terbinafine for a few months. She also visited the clinic for monthly rechecks, and there was ongoing communication between the College of Veterinary Medicine veterinarians, Frankie’s regular veterinarian and Frankie’s family.

“Luckily, she started to turn the corner within the first week of intensive care provided to her from her very dedicated human family members,” reports Dr. Keller. “We were able to ensure that Frankie was cleared of the infection a few months after the initial diagnosis.”

Over a year after Frankie was first seen at the hospital, the infection has not returned, and Frankie continues to do well.