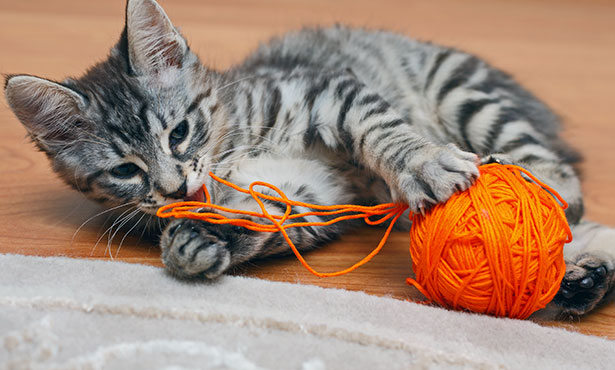 A ‘foreign body’ may pose a medical emergency

Animals are very curious creatures. But, as the old adage goes, curiosity can be deadly, or at least dangerous. So it is with animals that swallow things not meant to be swallowed: Your dog snarfs down a broken or too-small toy. Your cat goes from licking a string to ingesting it after the string gets stuck on her rough, scratchy tongue.

In veterinary terms, this object your pet has swallowed is referred to as a “foreign body,” and it may pose a medical emergency. Dr. Stanley Rubin, an internal medicine specialist at the University of Illinois Veterinary Teaching Hospital in Urbana, has seen many foreign body cases in cats and dogs. 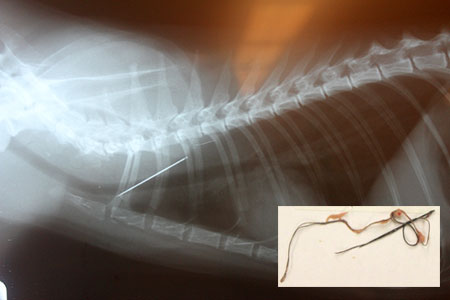 This radiograph (X-ray) shows a cat that has swallowed a needle and thread. The inset image shows the needle after it was removed from the cat via endoscope.

What Goes Down May Get Stuck

“I’ve seen it all—bones, pet toys, string, and even a whole radish—lodged in an animal’s throat (the esophagus) as well as the stomach and even sometimes the trachea,” says Dr. Rubin. The pet swallows these objects, but is then unable to cough or vomit them back out.

If a foreign body becomes stuck at any point in the digestive tract, from the mouth to the esophagus, stomach, or intestines, so that it partially or completely blocks the flow of nutrients and impairs blood flow to the bowel, then the foreign body becomes a life-threatening obstruction. In these cases, it is best to seek veterinary treatment as soon as possible.

Clues to a Foreign Body

Sometimes the owner actually sees the pet swallow a forbidden object. (Occasionally an animal swallows something that the owner has given it, such as a bone or string toy.) More likely owners will become suspicious that their pet has swallowed something it shouldn’t have when they find a tipped-over garbage can, they notice something missing from an open clothes drawer, or a squeaker toy disappears.

According to Dr. Rubin, the clinical signs that can accompany a foreign body ingestion range widely, from the obvious (vomiting, gagging) to the subtle (not wanting to eat, not defecating normally, and abdominal pain). A veterinarian will use the history from the owners, physical examination findings, and diagnostic imaging (ultrasound, x-rays) to make a diagnosis and develop an action plan. 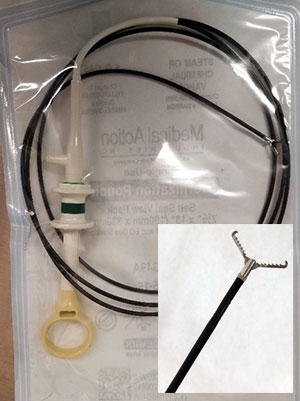 This flexible tool is fed through the endoscope. The inset image shows a closeup of the “grabber.”

“It is possible for a swallowed needle and thread to safely pass through the pet’s intestines,” Dr. Rubin says. “However, most people just don’t want to take the chance that the needle will cause other problems, so they choose to have it removed instead.”

About once a month, Dr. Rubin and his team at the Veterinary Teaching Hospital use endoscopy for foreign body extraction. Endoscopy involves a small flexible instrument that is illuminated with a camera that safely goes down the animal’s esophagus and into its digestive tract (image A). Using an endoscope, the veterinarian not only can see inside the pet but can also use tools, through a channel within the scope, to gently grasp and remove objects. These tools include a small wire loop and a small metal grabber that can hook on to the object to pull it out (image B). Animals undergoing an endoscopic procedure will be anesthetized. Removing objects via endoscopy is generally faster than surgery, less invasive, and does not involve post-surgical healing.

“Every procedure has risks,” Dr. Rubin says. “With endoscopy, there is risk of damage to the esophagus, especially if the object has a sharp edge.” Veterinarians will advise owners of the risks and benefits of the various options for removing the foreign body as they discuss the best course of action for the pet.

If you suspect that your pet has swallowed a foreign object, seek veterinary care immediately. If you have questions about foreign body removal, contact your local veterinarian.