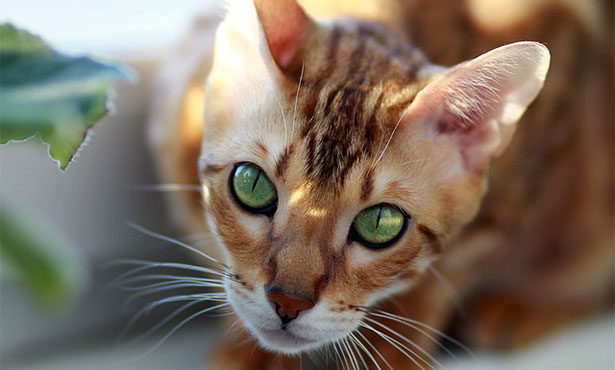 Feline hyperthyroidism is a disease that didn’t even exist 40 years ago. Now, it has become the most common endocrine disorder in older cats in the United States.

In June 2016, the American Association of Feline Practitioners (AAFP) issued its first set of guidelines for veterinarians regarding signs, complications, and treatment of this disease. Among the eight experts invited to coauthor the guidelines was Dr. Duncan Ferguson, who recently retired after 10 years as professor and department head at the University of Illinois College of Veterinary Medicine in Urbana.

Dr. Ferguson explains that feline hyperthyroidism occurs when a cat’s thyroid gland overproduces thyroid hormones, called T3 and T4. These hormones circulate through the blood and can affect almost every organ in the body. The heart is especially sensitive to thyroid hormones. High levels of T3 and T4 lead to increased heart rate, irregular heartbeats, and possible heart failure.

“Disease of the kidney is also commonly seen in conjunction with hyperthyroidism,” says Dr. Ferguson, “but research has not shown that hyperthyroidism directly causes renal disease, rather treatment of hyperthyroidism can reveal underlying renal problems.” 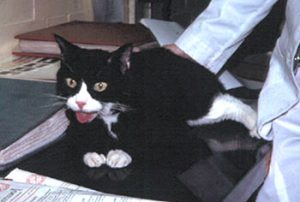 According to Dr. Duncan Ferguson, who took this photo, open-mouthed breathing “is a ‘classical’ presentation of severe feline hyperthyroidism. This is something we don’t see much any more as veterinarians have become better at diagnosing the disease before thyroid hormone levels get as high as they were in this cat.”

This disease is not seen in younger cats or, for some unknown reason, Siamese cats. It is also very rare in dogs.

Veterinarians will typically begin testing for hyperthyroidism in cats roughly 7 years old or older by measuring blood levels of the hormone T4.

“Feline hyperthyroidism was first identified when I was a veterinary student,” says Dr. Ferguson. Just before he completed his veterinary degree, he had an externship at the University of California, Davis, where veterinarians had never seen a hyperthyroid cat. Cases began showing up around the time Dr. Ferguson was there, so he jokes that he brought the disease to the West Coast with him.

In fact, this experience was repeated globally, as Dr. Ferguson traveled the world in the 1980s and 1990s, giving talks on feline hyperthyroidism. In Venezuela and Japan, for example, veterinarians did not find the talks relevant because they hadn’t yet seen any cases of the disease. But before long, hyperthyroidism started showing up in these countries as well.

“The recent emergence of feline hyperthyroidism indicates it’s a man-made disease,” Dr. Ferguson explains. “We believe it is correlated with cat food or environmental changes, but we still haven’t determined exactly what is causing it.”

Despite not knowing its origin, veterinarians have found very successful ways of treating this disease. In fact, overall success in managing feline hyperthyroidism ranges from 83 percent to 99 percent.

Of the four main treatment recommendations, the two less optimal choices are dietary therapy, where the cat is fed a low-iodine food, and daily medication. The problem with these options is that they must be maintained for the rest of the cat’s life. Surgical removal of the thyroid gland is also an option, although the surgery carries a high risk of damaging the important parathyroid glands located next to the thyroid gland.

The fourth option is the one that Dr. Ferguson recommends: radioactive iodine treatment. Contrary to movies and myths, this radioactive treatment will not give your cat superpowers. In fact, it is surprisingly safe and has little risk of side effects. This is because the thyroid gland absorbs almost all iodine in the body to make its hormones.

The administered iodine emits radiation that targets the thyroid gland and kills the abnormal cells. This is the most successful and preferred treatment, requiring only one injection and one hospital stay to permanently treat the disease.

The downside is the relatively longer hospital stay (3 days to 2 weeks) and the cost. The extended hospital stay is to ensure that all the radioactive iodine has exited the cat’s system through urine and feces before the owners handle their pet. This safety precaution prevents any radioactive substances from being transferred to humans or other animals.

“People often think iodine treatment is the most expensive option,” Dr. Ferguson says. “But it is roughly equivalent to the cost of feeding your cat a treatment diet, undergoing surgery, or giving your cat a daily medication for the rest of its life.”

Research May Provide the Key

In the next 10 years, Dr. Ferguson expects to see more refined monitoring and treatment of feline hyperthyroidism with the development of better hormone tests. Furthermore, he hopes to see ways to reduce the amount of radioactive iodine administered, which would decrease hospital duration. Dr. Ferguson suggests that feeding cats low-iodine diets prior to treatment might make the thyroid gland more sensitive to lower levels of radioactive iodine.

Dr. Ferguson also hopes that the next generation of researchers will be able to identify the cause of this mysterious new feline disease, which may provide the key to preventing it in the future.