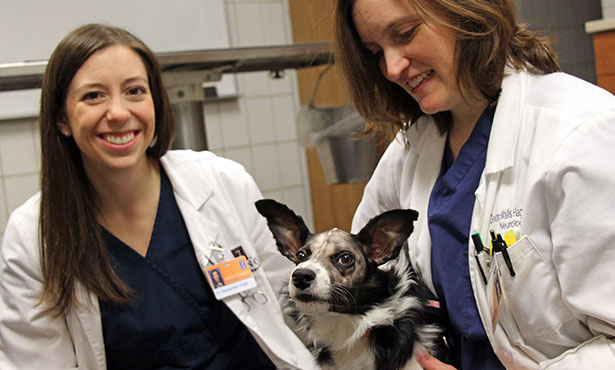 Seizures are scary to witness in humans, but they can be just as alarming to see in your pets. Many owners don’t realize that dogs can have seizures until the event happens. When a dog has two or more seizures, this disorder is called epilepsy.

Dr. Samantha Vitale, a veterinarian completing a residency in neurology at the University of Illinois Veterinary Teaching Hospital in Urbana, is currently doing preliminary research on epilepsy, comparing serum levels of trace nutrients in epileptic dogs with serum levels in healthy dogs.

According to Dr. Vitale (at left in the photo above, with Dr. Devon Hague and one of their patients), epilepsy falls into two main categories.

Any breed of dog can get seizures, although some breeds are genetically predisposed. This list is considerably long, so Dr. Vitale recommends talking to your veterinarian if you’re concerned about your dog’s breed predispositions.

Some dogs may experience focal seizures that alter their mental state for a brief time. These dogs might lose consciousness, they might “zone out” for a while, or they might have tremors of the face or display a repetitive action such as snapping at invisible flies.

“When a dog is having a generalized, also called a grand mal seizure, typical manifestations include full body convulsions, loss of consciousness, salivation, paddling of the legs, urination, and defecation,” says Dr. Vitale.

Seizures that last more than 5 minutes are considered dangerous because they can lead to serious brain damage and might make future seizures more likely to happen. A dog’s body temperature can get dangerously high during a long seizure, which leads to many health complications, such as organ failure.

Although there is no cure for epilepsy per se, Dr. Vitale says that treating the underlying cause for secondary epilepsy can reduce or eliminate future occurrences. Dogs with primary epilepsy can continue to live high-quality lives with proper attention and management. However, epileptic dogs often have shorter than normal life spans because their bodies are not completely healthy, as a result of either a known or an unknown cause.

“Owners of dogs with primary epilepsy can improve management of the disease by keeping track of pre-ictal behaviors,” she advises.

Pre-ictal behaviors are abnormal behaviors that some dogs display prior to the actual seizure. These can be seen seconds or hours before the seizure and can vary based on the dog. Some common behaviors include whining, nervousness, salivation, restlessness, hiding, or seeking out the owner, as if the dog can sense the seizure coming.

Although recognizing pre-ictal behaviors will not prevent the seizure, owners can be ready to watch or record the dog during the seizure to give a thorough report of it to their veterinarian. They can also move their dog to a room with a softer floor and less damaging objects, reducing the risk of injury during the episode.

After a seizure, dogs are often disoriented, confused, and restless.

Dr. Vitale hopes that her research on the serum levels of trace nutrients (such as copper, zinc, and magnesium) will identify differences between epileptic and healthy dogs. If so, perhaps dietary modifications can be used as an adjunct therapy for epileptic dogs. Dietary therapy could especially be key for dogs that are not responding to the usual medications.

If you have more questions about epilepsy or want to know if your dog is at risk, talk to your local veterinarian.