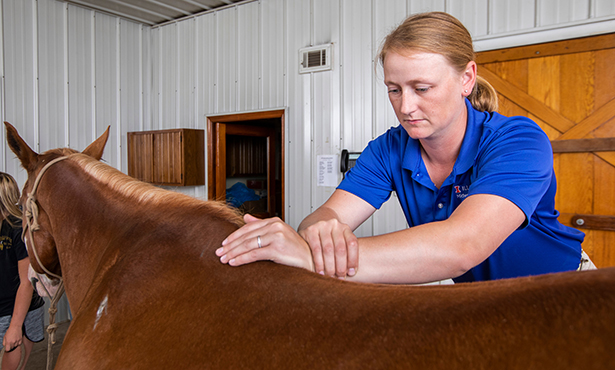 Most Effective for Biomechanical Conditions

For centuries now, many cultures have practiced spinal manipulation in people as a therapy to complement traditional medicine. It’s unclear when this practice was first used for animals, but the modern form of animal chiropractic arose within the past century.

Dr. Catherine Foreman-Hesterberg, a veterinarian at the University of Illinois, is certified in chiropractic for animals by Options for Animals: College of Animal Chiropractic and the International Veterinary Chiropractic Association. Animal chiropractors need to have specific training in both chiropractic technique and animal anatomy so that they know the differences among species and how to best adjust the vertebrae.

Chiropractic Adjustment for ‘Almost Any Species’

“Animal chiropractic is the diagnosis and treatment of vertebral subluxation complexes (VSCs) and dysfunctional joints of the spine and extremities,” Dr. Foreman-Hesterberg explains. VSCs involve functional, structural, and/or pathological changes of the spinal column that will affect the nervous system and ultimately the visceral and musculoskeletal systems.

“Almost any species, and animals of any age can receive a chiropractic adjustment,” Dr. Foreman-Hesterberg explains. “The animal just has to be receptive to the treatment and safe to work with.”

Dr. Foreman-Hesterberg takes into account the fact that young animals are more elastic while older animals tend to be stiffer. She adjusts the techniques she uses to meet the animal’s needs.

Many different signs can indicate that a pet may need to see an animal chiropractor. In dogs and cats, things like not wanting to jump or play, running at an angle, or being less active can indicate that something is out of alignment. In horses, an uneven gait, resisting the bridle, poor performance, or bucking under tack can indicate a need for a visit.

Chiropractic adjustment is most effective for animals that have a condition with a biomechanical or neurologic origin. These disorders include hip dysplasia, osteoarthritis, intervertebral disc disease, degenerative myelopathy, and several other disorders. If the animal has a primary neurologic condition, it needs to be evaluated by the animal’s primary veterinarian, followed by a board-certified neurologist before an animal chiropractor sees the animal.

Ensuring normal range of motion of the vertebrae can increase the function of the lymphatic and circulatory systems that work to circulate specific cells to precise parts of the body and clear toxins from the body.

“Currently, I see performance horses most commonly,” Dr. Foreman-Hesterberg says. She is based primarily at Midwest Equine at Illinois, an equine-only veterinary clinic in Farmer City. She says chiropractic can also be great for show livestock, helping the animals stand correctly in the show ring, which is a desirable trait they are judged upon.

Chiropractic adjustment may also be beneficial after a surgery. Dr. Foreman-Hesterberg is available to see small animal patients that are receiving post-surgical rehabilitation therapy at the University of Illinois Veterinary Teaching Hospital.

“Before I perform adjustments, I review the animal’s medical history from the referring veterinarian and perform a thorough physical exam,” Dr. Foreman-Hesterberg explains. 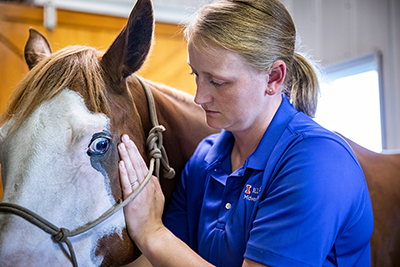 Dr. Catherine Foreman-Hesterberg performs a chiropractic adjustment on a horse.

Dr. Foreman-Hesterberg uses her hands to palpate, or feel, the joints and movement of the animal. If a correction is needed, a gentle yet specific thrust is applied. Occasionally a pop or crack can be heard when a joint is released. However, this is not as common in animals as it is in people.

“Areas that are misaligned can sometimes be painful to the animal,” Dr. Foreman-Hesterberg says, “However, most animals will still allow me to adjust them, and they appear to feel much better afterward.”

A horse will be restrained by a technician or the owner holding the lead and keeping the horse still. Horses are typically quite tall and pose a challenge to adjust without the proper equipment. Dr. Foreman-Hesterberg stands on a large block next to the horse to properly adjust them, adjusting one side of the animal, then the other, then moving to the neck and legs. Each animal chiropractor has their own method, but this is Dr. Foreman-Hesterberg’s preferred method.

Dogs and cats are adjusted while on the ground or a table, whatever is most comfortable for them. A technician or student holds the animal still while Dr. Foreman-Hesterberg adjusts one side of the animal and then the other, followed by the neck and legs, just like the horse.

“There are many benefits to chiropractic adjustment,” Dr. Foreman-Hesterberg says. Owners may see an improved gait and a reduction in pain immediately after an adjustment.

Following an adjustment, geriatric dogs and cats usually seem less stiff and act more comfortable. Owners may note that their animal will be more active, playful, and appear to have more stamina at home.

Depending on the condition, the animal may need multiple adjustments for continued improvement. To start, animals will likely need to be seen once a week for two to four weeks in a row. The schedule thereafter will depend on how the animal responds to treatment.

If you have questions about veterinary chiropractors, contact your local veterinarian.