A new strain of canine influenza made headlines in 2015 when it first appeared in the United States, sickening hundreds of dogs in Chicago. It took less than three years for that strain to spread to more than 30 other states. , director of the Medical District Veterinary Clinic at Illinois, a Chicago-based veterinary clinic operated by the University of Illinois College of Veterinary Medicine, was on the front lines of the initial outbreak. He says the new strain is still active—he has treated a handful of cases in 2018—though less devastating than before.

“In 2015, the dogs presenting with influenza were sicker than those with typical canine cough,” he recalls. “Dogs often had fevers and had mild gastrointestinal upset in addition to the respiratory signs of coughing.

“It does seem that, with time, the severity of illness has decreased in infected dogs. This can likely be attributed to the use of vaccines and some degree of natural immunity,” explains Dr. Sullivan.

“In 2015, all the dogs were naive to this disease, so they had no immunity. As the virus has spread to other parts of the country, each dog population likely experiences more severe illness with the first outbreak.”

Clinical signs of the virus in dogs can include sneezing, reverse sneezing that progresses to coughing, lethargy, decreased appetite, and fever. 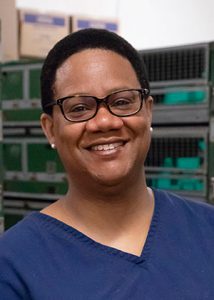 Dr. Yvette Johnson-Walker, a veterinary epidemiologist at the College of Veterinary Medicine in Urbana, says, “The H3N2 virus is extremely contagious and almost every dog that is exposed will catch it, although only about four in five dogs will show clinical signs. An infected dog that is not showing signs of illness can still transmit the virus to other dogs.

“The virus is transmitted through aerosolized particles, usually during coughing and sneezing. As with any contagious illness, isolating sick dogs is paramount for preventing spread.”

The virus is very hearty and can survive in the environment for a few days, she says. It is possible for dogs to contract influenza without actually coming into direct contact with another dog. For example, dogs could come into contact with the virus on surfaces in shared spaces, such as stairwells, elevators, and hallways in apartment buildings.

“My own dog was confirmed positive in 2015, and he did not have any dog contact, so I believe I brought it home on my shoes or clothes,” says Dr. Sullivan.

Dr. Johnson-Walker notes that vaccines are available for each strain of canine influenza, as well as one vaccine that will protect against both. “As with any vaccine, there is no guarantee that it will prevent the disease, but it will dramatically reduce the chances of infection and will make the disease milder and shorter lived if your dog does become infected,” she says.

Dr. Sullivan recommends vaccination for his patients that frequent areas like dog parks, boarding kennels, and groomers, where they are exposed to other dogs whose health status is unknown. “But I also tell my clients that dogs and puppies need to be socialized,” he stresses. “Fear of the flu should not inhibit your dog’s activities, even though avoidance is the best way to prevent exposure.”

Dr. Johnson-Walker adds, “Since we know the flu can be transmitted on surfaces like clothing, dogs with owners who come into contact with dogs of unknown vaccination status may also benefit from vaccination.

“It is also always a good idea for owners to maintain good hygiene. Washing hands after petting dogs, removing shoes you have worn outside when entering the house, and changing clothes after contact with a dog of unknown origin can help prevent spread.”

Since influenzas are caused by viruses, there is no medical treatment, but veterinarians can offer supportive therapy for dogs with the flu.

“Cough suppressants may be prescribed, and occasionally antibiotics to prevent secondary bacterial infections that can be co-infections, but it is important to understand that antibiotics themselves cannot treat influenza,” explains Dr. Sullivan.

“Healthy animals usually recover on their own or with some supportive care,” says Dr. Johnson-Walker. “About 10 percent of canine patients succumb to the flu, but these deaths tend to be among dogs that are very old, young, pregnant, or otherwise immunocompromised and that are more susceptible to developing secondary bacterial infections.

Since both strains of dog flu originated in other species, some may wonder whether the virus can jump from dogs. In fact, cats can be infected with canine influenza, but it causes only mild disease. However, cats can serve as carriers and can transmit the virus to dogs. There is not currently a vaccine for cats.

And what about the public health implications of canine influenza? Both Dr. Johnson-Walker and Dr. Sullivan state that, at this time, there is no evidence to suggest that either strain of canine influenza is capable of infecting people.

If you have questions about canine influenza, contact your local veterinarian.