Home / Pet Health Columns / The Case of the Calcium-Deficient Chameleon 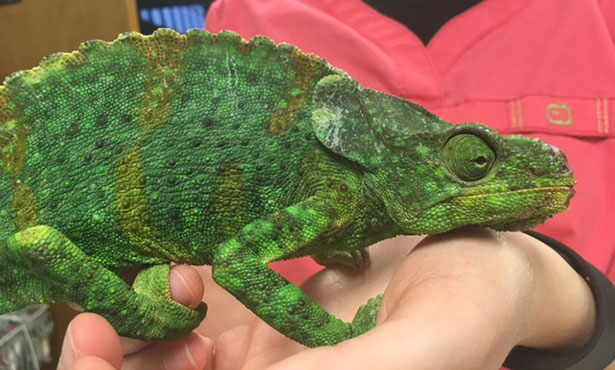 Chameleons are notoriously tricky pets to keep healthy. There are around 200 distinct species, each with its own particular climate needs. They also have extensive nutrient requirements, which inexperienced owners often neglect. 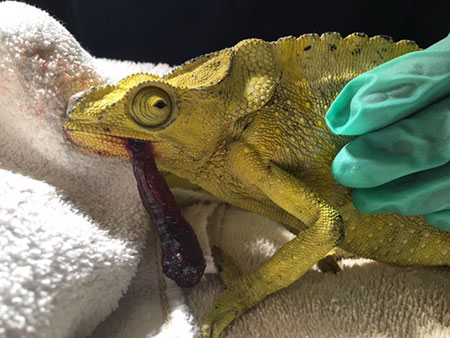 This patient, brought to the emergency room at the Veterinary Teaching Hospital with a protruding tongue, turned out to be a calcium-deficient chameleon. Note: Meller’s chameleons have bright green and yellow coloring as in this “before” photo. In the photo at the top of the page, the chameleon appears darker as a result of having recently been under anesthesia.

That’s why nutrient deficiencies were the first thing investigated by Dr. Sean Perry, a veterinary intern at the University of Illinois Veterinary Teaching Hospital in Urbana, when a one-year-old Meller’s chameleon was brought to the hospital’s emergency room. The unnamed chameleon had recently been acquired from a home that did not provide proper care. The new owners noticed that the chameleon’s tongue was protruding from the side of his mouth.

“When we see species of chameleons that are less common in the pet trade, generally the first thing we worry about is inadequate home care,” says Dr. Perry.

Meller’s chameleons are more often seen in zoos than as household pets, whereas veiled and panther chameleons can commonly be found in pet stores.

“Exotic chameleons are often shipped from their native habitats, where everything from their climate to their diet is very different from what the typical pet owner can provide,” says Dr. Perry.

In the case of this particular chameleon, a calcium deficiency was the most likely cause for his limp tongue. The tongue is one of the strongest muscles in the body. For chameleons, which throw their tongues to catch their food, the tongue is an extremely important muscle. It is also one of the first things to be affected when the body’s calcium levels run low. Chameleons may have difficulty pulling such a long muscle back into their mouth and holding it in place.

How and Why to Ensure Calcium Intake

Other signs of calcium deficiency in chameleons are general lethargy, decreased appetite, and broken bones. Calcium is necessary to flex muscles, but calcium is also stored in bone. When calcium reserves runs low, the body will start to pull calcium from bones, which can make them weak enough to fracture just from walking. If calcium is the only nutrient missing from a chameleon’s diet, it can be supplemented with their food fairly easily.

For normal Meller’s chameleons, calcium supplementation is simple. Most owners will feed their chameleons crickets or roaches. These insects can be gut loaded with calcium by feeding them foods high in calcium, such as healthy greens and fruits. The crickets should also be dusted with standard calcium powder, although owners should be careful that the powder does not brush off before the chameleon gets to eat it.

However, calcium deficiency can also come about through a lack of ultraviolet-B (UVB) light, which must be supplemented for pet reptiles housed indoors.

“In order for the body to use the calcium that it already has, it needs the active form of vitamin D; UVB light is vital to make vitamin D active in the body” says Dr. Perry. “Since they are no longer in the wild getting natural UVB light, artificial UVB lamps are very important for their body’s healthy physiology.”

While nutritional deficits tend to make up the majority of chameleon emergency cases seen at the hospital, climate also plays a major role in caring for these reptiles, according to Dr. Perry. For example, the popular pet panther chameleons come from a hot and humid region of the world. If they were brought to Illinois, they would need conditions that were more climate controlled, while Jackson’s chameleons from the mountains of Africa can survive at room temperature, so long as it is fairly humid.

In the case of the calcium-deficient chameleon that was admitted to the emergency room, his tongue had to be surgically removed, due to complications from his having bitten down on it. He is now being hand-fed multiple times a day by his owners and receiving calcium supplements in his diet.

“One of the most important things any new reptile owner can do is to consult an experienced reptile veterinarian for proper husbandry techniques,” says Dr. Perry. “Husbandry plays such a huge role in their well-being, and simple changes can go a long way in preventing situations like this from happening.”

Before getting a chameleon, or any exotic pet, please speak with an experienced veterinarian about the species’ needs to be sure that the pet is right for you.