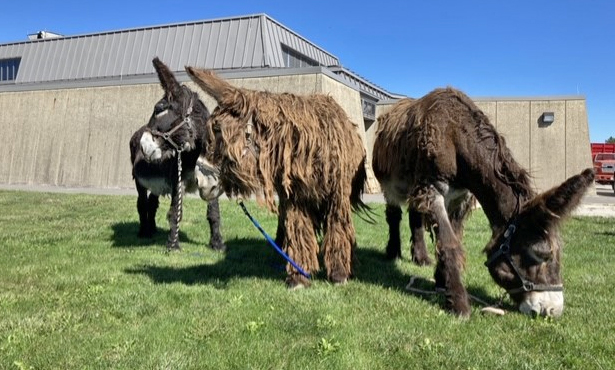 You’ve probably heard of endangered species. Although scientists estimate that dozens of species go extinct every single day, attention seems to focus on large wildlife such as rhinoceroses and great apes. But did you realize that domesticated breeds can also become extinct? One domesticated breed that came near to extinction is the Baudet du Poitou donkey.

Veterinarians with special training in reproductive medicine, called theriogenologists, play a key role in ensuring the continuation of endangered species, whether wild or domesticated. At the University of Illinois Veterinary Teaching Hospital in Urbana, Dr. Igor Canisso, a board certified theriogenologist, has been overseeing the care of five Baudet du Poitou females, called jennies, sent to the hospital for breeding.

The Baudet du Poitou breed has unmistakable characteristics. They are famous for their dark brown or black long, shaggy coat and fluffy ears. Their hair coat often resembles long dreadlocks. These creatures are one of the largest breeds of donkey in the world. Despite their large size, they are quite docile, social, and well-adapted to a variety of work. The breed has a rich and interesting history.

“The donkeys are known to have existed in France in the Middle Ages. In 1717, they were described in a memoir by advisor to King Louis XV,” says Dr. Giorgia Podico, a veterinarian pursuing specialization in theriogenology who has been working with Dr. Canisso. “At that time, the donkeys were mainly used in agriculture, to plow fields and harvest crops.”

In the 19th and 20th centuries, Baudet du Poitou were shipped from France to the U.S. However, these donkeys were integrated into U.S. breed stock instead of being maintained as a separate breed.

Conservation of the Breed

“The donkeys we have been caring for this summer came from a farm in Vermont. Their owners intend to start a breeding program for Poitou donkeys,” Dr. Canisso says. Because Dr. Canisso is a world-renowned expert on donkey reproduction, the jennies’ owner contacted him to help with this conservation project.

“The Baudet du Poitou breed is currently endangered,” Dr. Podico explains. “Their population is below 500 animals worldwide.” In 1977, there were only 44 of these donkeys, since automation of the agriculture industry made them less valuable in farming.

Today efforts to conserve the Baudet du Poitou as a distinct breed include careful recordkeeping of donkey genetics and breeding matches. There are two official registration books, known as Book A and Book B.

“Book A is for purebred animals whose parents are from Book A,” Dr Podico explains, “and Book B is open to cross-bred females that are out of a Book A male and a female of unknown origin or registered in book B.” It is important to know the history and genetics of the donkeys to ensure a proper match is made for breeding.

“Since there are few of these donkeys alive and in the same place, our choices in breeding techniques were limited,” says Dr. Podico. “We are artificially inseminating the jennies with frozen semen from two registered jacks (male donkeys).” This semen was originally frozen in 2002 in the U.S. The breeding must be timed correctly with the donkey’s estrous cycles to increase the chance for success.

Breeding the jennies with frozen semen can be a challenge because there is a strong inflammatory reaction after breeding that can inhibit a successful pregnancy. To complicate matters further, there are very few studies that discuss pregnancy rates in these creatures. According to Dr. Podico, the studies that have been published report “an incredibly low pregnancy rate of 0% to 20% per cycle.”

Despite the challenges, Dr. Canisso and Dr. Podico have confirmed that two of the jennies, named Quiche Lorraine and Babette, are pregnant. Both jennies have the typical look of this breed, traits that will be passed on to their offspring.

“We intend to continue being actively involved in breeding jennies,” Dr. Podico says. This conservation project has opened many more opportunities for the University of Illinois team. Further research projects with semen cryopreservation (long-term freezing) will lead to a better understanding of how to improve breeding management and fertility of these donkeys.

Dr. Canisso also plans to expand the semen available from jacks in Book A to allow other conservationists to breed the Poitou in the U.S.

If you have questions about species conservation, contact your local veterinarian.