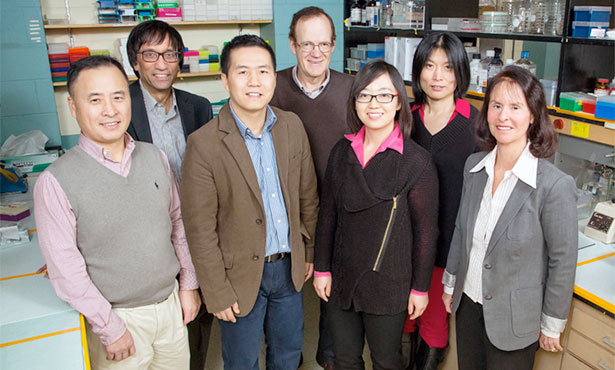 Two new drug compounds – one of which has already proven useful in a mouse model of multiple sclerosis – appear to be effective in treating endometriosis, a disorder that, like MS, is driven by estrogen and inflammation, scientists report in Science Translational Medicine.

The researchers hope to eventually use the new compounds and others like them to treat a variety of disorders linked to estrogen signaling and inflammation: endometriosis, multiple sclerosis, inflammatory breast cancer, liver fibrosis, and cardiovascular and metabolic problems associated with obesity, for example.

The team tested the new compounds in a mouse model of endometriosis (en-doh-mee-tree-OH-sis) and in human endometriotic cells. Both compounds interact with estrogen receptors, signaling proteins that regulate the activity of many genes. Some of these genes contribute to the body’s immune response and promote inflammation.

Endometriosis afflicts as many as 15 percent of reproductive-age women in the U.S. and millions of women around the world. The disorder can lead to scarring of the ovaries, fallopian tubes and other tissues; infertility; inflammation and chronic pain.

“The usual treatments for endometriosis are aimed at suppressing estrogen production because it’s an estrogen-driven disease,” said University of Illinois molecular and integrative physiology professor Benita Katzenellenbogen, who led the new study with chemistry professor John Katzenellenbogen. “We thought that a better approach might be to interfere with both of the main aspects of endometriosis: the growth-promoting actions and also the inflammatory aspects – both of which involve the estrogen receptor,” she said.

Current pharmaceutical treatments can suppress endometriosis, but often fail to reduce the pain and inflammation that are hallmarks of the disorder, said John Katzenellenbogen, whose laboratory developed the new compounds.

“Current treatments also have side effects on other tissues through which estrogens work, and so they can’t be taken forever,” he said. “There also is unfortunately a high rate of recurrence of the disease.”

The new compounds, OBHS (oxabicycloheptene sulfonate) and CLI (chloroindazole), interact with two types of estrogen receptors (ER-alpha and ER-beta, respectively). Each drug reduced the size of endometriotic tissue or prevented its growth outside the uterus in mice. Each also reduced inflammation and suppressed the development of new neurons and blood vessels that support the misplaced tissue. The treatments did not reduce fertility or the health of young pups born to mouse mothers that had undergone the therapies.

The compounds had similar positive effects in human endometriotic cells that were grown in culture with human immune cells, called macrophages, which can contribute to the inflammation and growth of endometriotic tissue.

The research team also found that adding either of the new compounds to a common endometriosis treatment, letrazole, did a better job of suppressing endometriosis than letrazole alone.

“Inflammation is a driver of endometriosis,“ Benita Katzenellenbogen said. “At some point you’ve got to turn it off, and these compounds turn it off by working through the estrogen receptors.”
In a previous study published in the Proceedings of the National Academy of Sciences, researchers found that CLI suppressed – and even reversed – the loss of brain neuron structure and function in a mouse model of MS.

While many more years of work must be done to test these new compounds in other models and, eventually, in human patients, the work demonstrates a new approach to treating endometriosis and other disorders tied to estrogen signaling and inflammation, the researchers said.