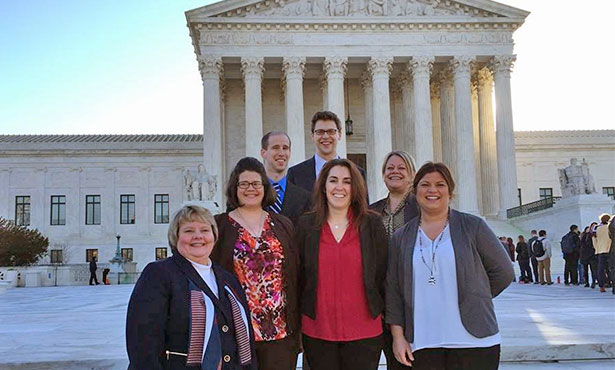 Dr. Matt Holland, who earned an Illinois veterinary degree this month, is one of three veterinarians recently selected to serve as full-time advisors to congressional staff through a one-year fellowship sponsored by the American Veterinary Medical Association (AVMA). The AVMA fellows will advise on science and technology policy issues such as food safety, public health, animal welfare, research, and small business.

I ran for national president of the Student American Veterinary Medical Association, and was fortunate enough to be elected… I saw a side of the profession I had no idea existed. You work on policy. You discuss the current challenges that vet students are facing; right now, the two biggest issues are student debt and mental health… That really fills me up, that is what charges my battery and gives me energy.

While an Illinois student, Holland was elected president of the Student American Veterinary Medical Association, a position that gave him international leadership experience over three years. He entered the veterinary field as a second-career student, having worked for several years as a freelance television producer after completing a BA in radio and television journalism from Drake University. At Illinois he enrolled in the joint veterinary-master’s in public health degree program. The MPH degree is completed at the University of Illinois at Chicago after graduation from the veterinary degree program.

He wrote several blogs for Illinois while a student:

He will arrive in Washington, D.C., in August and be placed at a congressional office after interviews with a variety of committees.

The AVMA Fellowship Program is sponsored through the American Association for the Advancement of Science, which works to place scientific experts in congressional offices where they are needed. The AVMA funds the program to protect, promote, and advance science and the veterinary profession in Congress.

To date, more than 65 veterinarians have participated in the AVMA Fellowship Program, including Illinois faculty member Dr. John Herrmann and Dr. Kate Varela.

Photo from the February 2016 AVMA Legislative Fly-in, co-hosted by AVMA’s Governmental Relations Division and Banfield in Washington, DC. Matt Holland stands on the top step with a delegation from Illinois: from left: Dr. Gail Golab, director of the Division of Animal Welfare at AVMA and a 1991 graduate of our college; Lynsee Melchi and Matthew Shockey, Class of 2017; Dr. Sandra Faeh, ISVMA President-elect and a 1996 graduate of our college (in red); Amy Kulinski, AVMA product marketing manager (behind); and Cassandra Wolsic, Class of 2016. Holland had also attended the 2015 Legislative Fly-in and met with fellow Illini Rep. Kurt Schrader, a Democrat from Oregon and a 1977 graduate of our college.