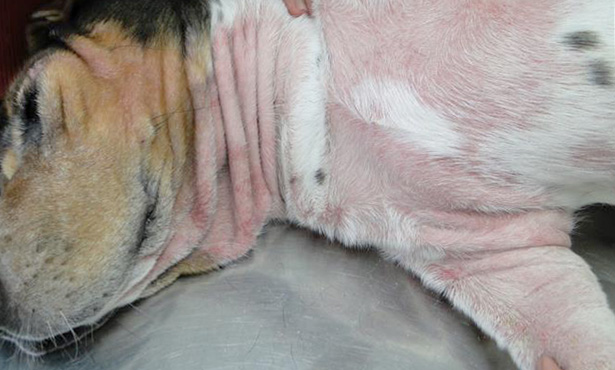 ABOVE: Figure 3. Hypotrichosis and erythema of ventral neck and thorax of a Basset Hound with Malassezia dermatitis secondary to allergic dermatitis.

Malassezia dermatitis is an inflammatory condition associated with increased numbers of Malassezia yeasts on the skin that lead to dermatitis and pruritus.

The diagnosis of Malassezia dermatitis is based on supportive clinical signs and cytology. The characteristic “footprint-shaped” yeast can be microscopically identified on cytologic exam of a skin lesion (Fig. 1, 2). 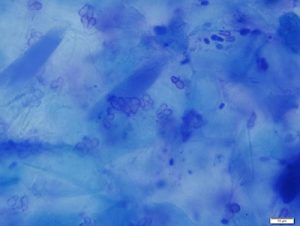 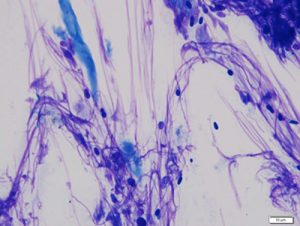 For microscopic evaluation of the sample, utilize low power magnification to first identify cellular areas and then switch to oil immersion to identify and quantify the yeasts.

Malassezia spp. are commensal organisms, but if yeasts are identified on cytology from suggestive lesions, the infection should be addressed and treated. Some patients with Malassezia hypersensitivity can experience significant pruritus and erythema from a relatively small number of yeasts. 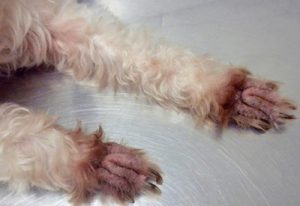 Figure 5. Alopecia, erythema, edema and salivary staining of front paws of an allergic Poodle mix with Malassezia pododermatitis. Brown discoloration of claws due to Malassezia paronychia. 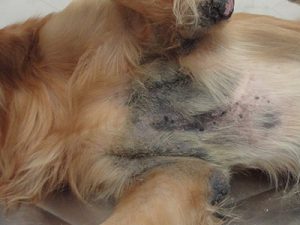 Figure 4. Alopecia and hyperpigmentation involving axillae and ventral thorax of a Golden Retriever with Malassezia dermatitis secondary to allergic dermatitis.

In dogs, Malassezia dermatitis lesions can be localized or generalized. They are typically characterized by erythema, scaling, and/or greasy exudation. In chronic cases, lichenification and hyperpigmentation also develop. Pruritus is often present and may lead to traumatic alopecia and excoriations. Paronychia (nail fold inflammation) may occur alone or in combination with more generalized pododermatitis. Brown discoloration of the adjacent claw and/or interdigital hair is often observed in cases of Malassezia paronychia (Fig. 3-5). 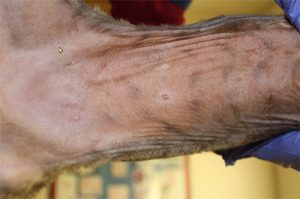 Malassezia is not considered a common pathogen in cats. The yeast dermatitis in cats is characterized by seborrhea oleosa, erythema, hypotrichosis, and the accumulation of greasy, adherent, brownish scales (Fig. 6). Sphynx and Devon Rex appear predisposed to Malassezia carriage, and often have a greasy exudate on the claws and in the claw folds. Pruritus can be present. Malassezia yeasts have also been associated with cases of facial dermatitis in Persian cats and chin acne. When Malassezia dermatitis is present in cats, consider an underlying cutaneous or systemic disease, such as allergies, endocrine and metabolic diseases, neoplasia, and infection with FeLV or FIV.

Topical therapy can be used as the sole treatment for focal or generalized Malassezia dermatitis. Topical medication is important in cases with an incomplete or poor response to systemic treatment because of biofilm formation, and is also preferred in cases of yeast pododermatitis. Shampoos are typically applied once to twice weekly. Sprays, creams, lotions, or wipes are typically applied every 12 to 24 hours.

Various antifungal agents are marketed for the treatment of yeast skin infections. For both dogs and cats, these include topical azoles (e.g., miconazole, ketoconazole, clotrimazole, and climbazole), chlorhexidine preferentially in combination with azole agents for synergistic activity. Options just for dogs include selenium sulfide 1% to 2.5% and terbinafine.