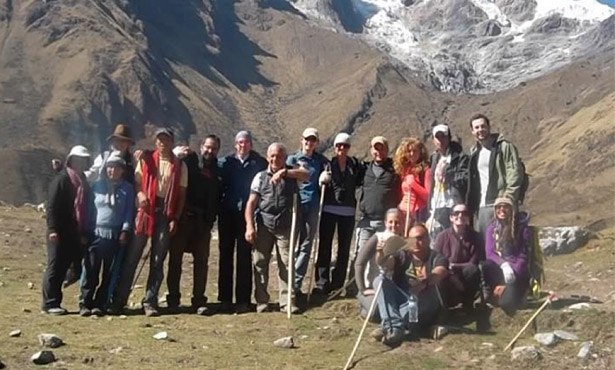 In the first days of August 2013, I packed up my backpack, sleeping bag, stethoscope, and hiking boots, and flew south to Lima with a few butterflies and a lot of excitement and curiosity. I would be meeting up with a group of veterinarians and veterinary students from across the United States and Canada to embark on a two week trip to provide medical care to working mules and horses in rural Peru.

I had discovered this international equine service group browsing the website of an organization I’d worked with the summer before—Rural Area Veterinary Services (RAVS)—spaying and neutering cats and dogs in tribal South Dakota.  I was happy to have the opportunity to attend this year’s excursion and receive credit through the College of Vet Med; similar trips occur via other programs who lead vet students to impoverished regions in the US and abroad, but they are often touted solely as a way to gain more technical, hands-on experience. Being a fourth (and final) year veterinary student, this trip would count as one of my clinical rotations, so I had high hopes for the skills and knowledge I would gain over the next two weeks. The vet group all met with high spirits as we got ready to embark on our trip, and despite a very long delay in the Lima airport as all of our veterinary supplies were opened and inspected, we finally reached our hostel in Cusco. After an afternoon of reviewing the inventory that had been collecting dust for a year in storage and combining the new supplies we’d brought from the U.S., we packed enough materials for the next day’s work, and headed upstairs for a long, well-deserved nap. In the evening, we met with the rest of the group we would spend the next couple weeks with: several vet students and a veterinarian from Peru, and one vet student from Nicaragua. Additionally, we met the members of the Peruvian non-profit group who had organized the worksites, food, and other logistics of our travels. Following an evening enjoying authentic Andean cuisine (and tasty Pisco sours!) and getting to know each other, we slept well that night in preparation for our first working day. 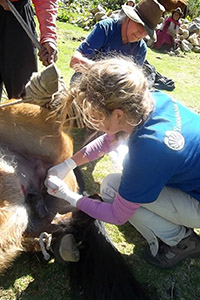 For those not familiar with it, Cusco is a large (pop. ~500,000) city that many Machu Pichhu tourists initially fly into. On the outskirts are towns where many mule drivers, or “arrieros” live with their strings of pack mules and horses. On our first day of work, we learned about how the days would flow and began a system to effectively care for the days’ equids. We split into teams of intake, surgery, anesthesia, dentistry, and farriery. An arriero would arrive herding a group of anywhere from 5-20 loose horses and mules, and the intake team would perform an initial assessment of the animals: determine age, sex, body condition score, state of their teeth and feet; get a history from the owner about whether their animal had any recent problems; and find out if they wanted a castration performed. Intake would also address any obvious issues, such as saddle sores, wounds on legs and feet, and vampire bat bites (which were very common in the region). After numbering each animal with a large crayon to keep straight who was who, we would vaccinate them against tetanus, give them a dose of de-wormer, and send them off to the other stations to perform work as needed.

Though Quechua is the native Andean language, almost everyone there spoke Spanish, and some arrieros and their families knew English. On top of this, enough members of our group were fluent in Spanish that we had few language barriers with the owners. Effective communication, however, could be a whole different story. I was prepared to see a different level of horse care than I was used to the U.S., but the experience was a bit eye-opening (even being prepared). Most of the horses and mules had to be blind-folded for us to even get near them, and the voices of their owners scared them as much as any needle we would use. The relationship between arriero and mule was one of necessity; these were definitely working animals that families relied on for their income, any they were not pets. I found that I was most fulfilled on this trip was when I broke through to an arriero, whether it be when they accepted the importance of dental work, proper hoof care or nutrition, or when I made a point in effective mule handling with calm words and non-threatening movements. Though we didn’t always leave a lasting impression on all owners, and I still got kicked by a couple ornery mules who didn’t give a hoot about my thoughts in horse-handling, the strides we made will make a difference in the lives of some horses and mules.

We spent a couple days driving to worksites outside Cusco during the day and heading back to our hostel at night, until we were ready to move locations. On day 3, we woke up around 4am and drove to the next worksite, Mollepata, where we would stay in another hostel and work for three days. We were promised a busy stay from those who had attended the trip in years past, and the promise did not disappoint. In a day, we could see over 100 animals by our group of 15. Once we set to work in Mollepata, our teams had grown more efficient in intake, and the surgery and anesthesia teams had a more organized system in place. Along with castrations, the veterinarians would undertake surgeries such as tumor removals, enucleations (removing a painful, non-treatable eye), and correction of castrations that had been performed locally in a non-sterile, less-than-ideal fashion. The intake team also branched beyond the norm; we worked up horses that were lame, those with signs of respiratory disease, and those who had a history of colic. In addition to the work we performed during the day, several of the veterinarians, both from the U.S. and Peru, hosted a meeting in the town square for any interested locals who had questions regarding horse care. RAVS has several goals for any trip of this nature: offer medicine, surgery, and preventive care for the working animals; teach veterinary students; and promote sustainability in each location. We packed several sturdy halters in our supplies to be given away to arrieros who were interested and cooperative, both as a thanks and incentive to return the following year. We also brought extra horse-shoeing equipment to sell to people who seemed interested in trying out the profession. The goal, in theory, is to work ourselves out of business, by supporting local veterinarians and farriers. I see that that goal won’t be achieved at least within the next few years, however, allowing room for me and other students to take advantage of such a wonderful opportunity.

We took a break from working to take a long hike up to our next worksite, in an extremely isolated region. We ended up splitting into groups of 3-4, and armed with packs of food and plenty of water, we walked anywhere from 6-9 hours to make it over the Salkantay Pass (elevation around 15,500 feet!) to Huayrac. We put veterinary supplies and some personal items on mule back, and carried with us only the essentials. Despite the fact that we were camping, with questionable access to showers or toilets, and generally roughing it, we ate remarkably well the entire trip. The trek we took is part of a path on which an outfitting company leads tourists to Machu Pichhu. The non-profit group I mentioned earlier is a branch of this adventure travel company, and we were fortunate enough to have them send two cooks with us. With all of the hard work we were putting in during the day, and the hiking we had been and would be participating in, we needed to stay well fueled, and our cooks provided excellent, hearty, local foods. Some of the best dishes included cuy (guinea pig), alpaca, mutton, and chicken, much of which was acquired live from local sources. We also had lots of quinoa and potato dishes. The food was delicious and well cooked, and no one got sick from it. Several of our group suffered from varying degrees of altitude sickness, but most of us adapted to the elevation over the time we were in Cusco, and we all took “soroche pills” that we had been prescribed in the U.S. or bought from local pharmacies.

The final 3 days were at one worksite in a small town called Collpapampa. It was with heavy hearts that we woke up on our last work day, since we had all gotten to know each other well, enjoyed conversations, jokes and stories around nightly campfires, and really liked the good work we were doing. However, the trip would end on a visit to some natural hot springs we could swim in, and a trek to Machu Pichhu for those who had not been before, so we couldn’t be too sad with the adventures we had ahead of us. Once we reached these destinations, it was a strange feeling to act as tourists and be surrounded by so many others from America again, but we soaked in the sites and took plenty of pictures. The whole group met up one last time in Cusco for a final inventory and a dinner at a lively restaurant with local food, music, and dancing, and a night out on the town. We parted ways, sad to leave Peru but inspired to get more involved in similar work in the future.