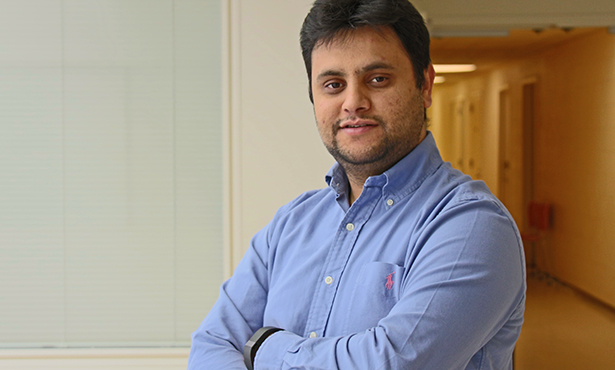 Dr. Zeeshan Fazal, a postdoctoral research associate currently working in the laboratory of Dr. Michael Spinella, comparative biosciences, received a commendation for work he participated in while at Stanford University.

The Group Achievement Award was presented to the E. coli AntiMicrobial Satellite (EcAMSat) mission team. Their project, which took place on a nanosatellite, investigated space microgravity effects on the antibiotic resistance of E. coli, a bacterial pathogen responsible for urinary tract infection in humans and animals.

We anticipate that we will discover novel candidates effective in inhibiting RpoS and, eventually, antibiotic resistance, not only in space but on Earth

The team was a partnership between NASA’s Ames Research Center and Dr. A.C. Matin, at the Stanford University School of Medicine, who was Dr. Fazal’s professor. 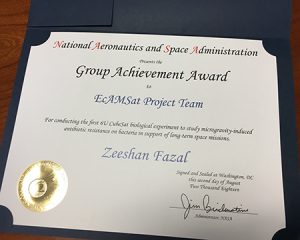 The award states it is “for conducting the first 6U CubeSat biological experiment to study microgravity-induced antibiotic resistance on bacteria in support of long-term space missions.”

Overall, the experiment seeks to determine the lowest concentration of antibiotic that inhibits bacterial growth. The knowledge gained in this experiment may be useful for prescribing the correct dose of antibiotics for future space travelers.

EcAMSat was the first NASA biology mission to use the “6U” configuration (six times the volume of a single CubeSat unit) of nanosatellite. According to the NASA website, EcAMSat weighs about 23 pounds and measures approximately 14.4 inches long, 8.9 inches wide, and 3.9 inches tall.

“We explored the genetic basis of antibiotic sensitivity in a multidrug-resistant strain of E. coli that causes urinary tract infections,” says Dr. Fazal.

In an experiment carried out between September 2017 and February 2018, high-throughput virtual screening of unique compounds was used to search for effective inhibitory molecules against RpoS, a gene that regulates stress response in E. coli. This experiment was followed by testing the candidate compound(s) for their efficacy to weaken the bacteria’s resistance to gentamicin, an effort which is still in progress.

“We anticipate that we will discover novel candidates effective in inhibiting RpoS and, eventually, antibiotic resistance, not only in space but on Earth,” he says. “Also, this is the first-of-its-kind study on RpoS-based inhibitor discovery against uro-pathogenic E. coli.”