He worked as a computer engineer, and dreamed of becoming a professional musician. But Diego Almeida says he didn’t discover his true calling, his life’s passion, until he contemplated an offhand remark from his landlord.

“She asked, ‘Have you ever thought about going to school to put shoes on horses?’” he remembers. “I never really knew there was such a thing. I always thought it was a trade that a person learned from generation to generation.”

I’m pretty competitive, and I challenge myself a lot. If I make a horseshoe and I know I can do better, I’m ready for the next horse, because I want to try it again…because every horse, every hoof, is different. That’s the beauty of it … the fact that there’s always room for improvement.

Not only did he find such a thing—the Midwest Horseshoeing School in Divernon, Ill., south of Springfield, acquired in February 2017 by the College of Veterinary Medicine—but he also became an integral part of its operation, spending the last seven years as a farrier instructor and eventually co-owner of the school.

As you’ve probably guessed, the landlady’s question didn’t just come up in conversation.

At the time, Almeida, a native of Brazil, had elected to come to the U.S. and take introductory courses at Moraine Valley Community College in Palos Hills, bringing him closer to the Chicago blues and jazz scene where he hoped to advance his guitar skills. His father, a now-retired colonel in the Brazilian army, is an avid horseman and still maintains a small stable on his farm.

“My Dad got me into horses,” he says. “I grew up around them. I rode mostly dressage and jumpers, endurance horses.” Almeida also brings a passion to his role as an instructor. He won the AFA’s J. Scott Simpson Outstanding Educator Award in both 2015 and 2016.

Sometimes the homesick young student would reminisce about his equestrian childhood with the woman in whose home he rented a room. For his birthday, she decided to surprise him with some riding time at a nearby stable. So impressed was the stable owner with his skills that she offered Almeida a part-time job as a trail guide.

“It was very fun,” says Almeida, 36. “I met a lot of people. But then in the wintertime, there was no work.” Sensing his melancholy, his landlady made an off-the-wall suggestion as to one way he could stay around horses practically year-round. He researched online and found the Midwest school.

For Almeida, it was a shoo-in.

Although he undoubtedly works longer and more physically demanding hours now as a farrier and instructor, he says he grew disenchanted with his first career as a computer engineer.

“I didn’t want to be stuck in an office all day,” says Almeida. “I would walk in at 7:30 in the morning and I would leave at 8 o’clock at night, just sitting there all day. I’m a pretty active guy.”

So he jumped at the opportunity when Steve Sermersheim, owner of Midwest Horseshoeing School and MiddleFork Forge (which also has been acquired by the college) and the man he calls his mentor, offered him an apprenticeship in 2010 after he completed what was then a 12-week course. Seven years as a farrier instructor later, Almeida has received the American Farrier’s Association Outstanding Educator Award—two years in a row. 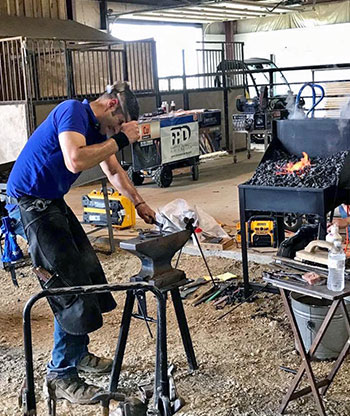 Some tools of a farrier’s trade: Fire, anvil, hammer, and steel.

“The thing about it is, it’s very challenging,” Almeida says of his work. “I’m pretty competitive, and I challenge myself a lot. If I make a horseshoe and I know I can do better, I’m ready for the next horse, because I want to try it again.

“So even though you’re doing the same thing every day it’s still different, because every horse, every hoof, is different. That’s the beauty of it, there’s never a pinnacle. Some people say it’s a lifetime trade. That’s what I enjoy, the fact that there’s always room for improvement.”

There’s room for caution, too. A successful farrier needs to be a bit of horse whisperer, too.

“It is dangerous,” Almeida concedes. “You can get kicked or hurt around the horses, especially if you are dealing with one that is not very well behaved. The job of a farrier is not to train horses, but you have to understand horsemanship. Especially nowadays, a lot of people who own horses don’t use them. They treat them like pets, so they’re never taught respect. Those are the ones that can potentially hurt you.”

In his “spare” time, Almeida maintains a reciprocal arrangement with a horseshoeing school in Colombia. “Every year we have one or two students from there, and we try to go there once a year to help the guys who can’t come because it’s so expensive. We’re helping them develop their certification process.