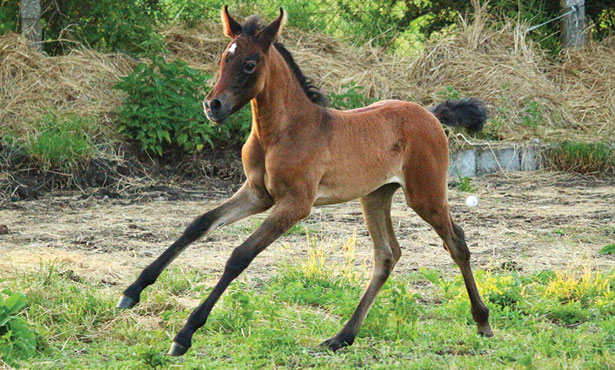 Excerpted from a presentation given at the 2016 AAEP meeting by Dr. Pamela A. Wilkins, MS, PhD, DACVIM, DACVECC.

Patent urachus is a relatively common problem identified in foals during the neonatal period.

The urachus is the extension of the urinary bladder of the fetus to the allantoic cavity, contained retroperitoneally within the umbilical cord between the two umbilical arteries, and is involved in the removal of nitrogenous wastes from the fetus. Horses have an open and functional urachus until the time the umbilical cord separates at parturition, leaving both internal and external umbilical remnants. Although functional closure of the urachus occurs at this time, anatomic closure does not. The urinary bladder and associated internal umbilical remnant gradually retract from the body wall over the first several weeks of life.

Patent urachus is readily recognized when a foal is either observed to have a stream of urine originating from the umbilicus or it is noticed that the hair around the umbilicus is consistently wet. Identification of urachal patency can be somewhat challenging in male foals that urinate into their prepuce, more common if the penile frenulum is still intact. In these cases, placing a flat hand perpendicular to midline and oriented vertically on the ventrum between the umbilicus and the prepuce will deflect the urine stream originating from the prepuce and allow direct visualization of any urine stream from the umbilicus.

Causes of patent urachus can be categorized as:

In these cases patency may be present immediately after birth or become apparent in the first few days of life in an otherwise healthy and vigorous foal. The umbilical cord may have broken close to the foal or been cut or tied off close to the foal. These cases may also be observed in male foals urinating into their prepuce, resulting in a constantly wet macerated umbilical stump. In some cases the umbilical stump may have been treated often and vigorously, again resulting in a constantly wet umbilical stump. Paradoxically, use of silver nitrate or higher concentrations of iodine solutions can result in patent urachus secondary to excessive drying and subsequent necrosis of the umbilical stump.

This form of patent urachus generally resolves spontaneously as the foal becomes more active and micturates more frequently, applying tension to the internal umbilical remnant and encouraging closure of the urachus.

Patency of the functionally but not yet anatomically closed urachus may occur secondary to abdominal straining, such as seen with meconium retention/impaction or stranguria secondary to urachitis. Urachitis is commonly associated with urachal diverticulum, where the urachal portion closest to the bladder remains open, resulting in some urine pooling in the urachus. This condition is only recognized with an ultrasonographic examination of the internal umbilical remnant. It generally requires no specific treatment and usually resolves within 1 to 3 days.

The urachus becomes patent associated with infection of structures of the internal umbilical remnant and generally manifests when a foal is several days to 1 to 2 weeks of age. Infection may remain clinically silent for a time; localized clinical signs of umbilical stump swelling, purulent discharge, and heat and pain on palpation are compatible with umbilical infection. The umbilical stump should be evaluated daily for evidence of local infection. In these cases where infection has become locally extensive, or becomes systemic, clinical signs may include fever, depression, and poor suckling.

Foals with urachal infection or trauma should be ultrasonographically evaluated frequently, even daily. Development of uroperitoneum generally requires surgical intervention and correction by removal of the umbilical remnant once the foal is medically stable.

Foals with critical illness (such as sepsis, neonatal maladjustment syndrome, prematurity) or with problems such as congenital severe flexural deformities may experience prolonged recumbency. Patent urachus is an expected problem in these cases. Its genesis is generally similar to simple patent urachus, with components of mechanical patent urachus, as the ventrum of these foals are frequently damp, causing maceration of the umbilical stump, and the foals are not assuming a normal body position to urinate.

Trauma secondary to recumbency may also result in early loss of the umbilical stump. These foals may not recognize a full bladder and the need to urinate, resulting in increased pressure on the urachus from the full bladder. This is a particular problem with critically ill male foals due to the resistance to passive urination presented by their long urethra. In the majority of these cases umbilical or urachal infection is not the primary cause.

Many cases of simple patent urachus identified in otherwise healthy and active foals that are not associated with umbilical remnant infection do not require specific treatment and will resolve with time and activity, generally within 1 to 3 days following birth. Local treatment in these cases includes keeping the area clean and dry and using emollients to provide a moisture barrier to prevent urine scalding in affected areas.

Patent urachus secondary to umbilical remnant infection will commonly respond to medical management, administration of broad-spectrum antimicrobial drugs, and close monitoring. A bacterial culture of the stump may identify local contamination rather than the culprit. Empirical anti-microbial treatment should be started immediately following assessment; choices for treatment including a β-lactam and an aminoglycoside.

Renal function should be closely monitored, at least every other day, if aminoglycoside treatment is chosen, with attention paid to the normally decreasing creatinine concentrations over the first 1 to 3 days of life. Increases in creatinine and BUN indicate that aminoglycoside treatment should be altered or abandoned. If clinical and ultrasonographic assessment indicates improvement, medical management may be continued; however, if medical management does not result in relatively rapid improvement, surgical resection of the umbilical remnant should be considered. Uncontrolled or severe infections may rarely result in adhesion formation between abdominal contents and the infected internal umbilical remnant and should be considered a potential indication for surgical intervention. Successful medical management might require 2 to 3 weeks of treatment but avoids the need for general anesthesia in a compromised foal.