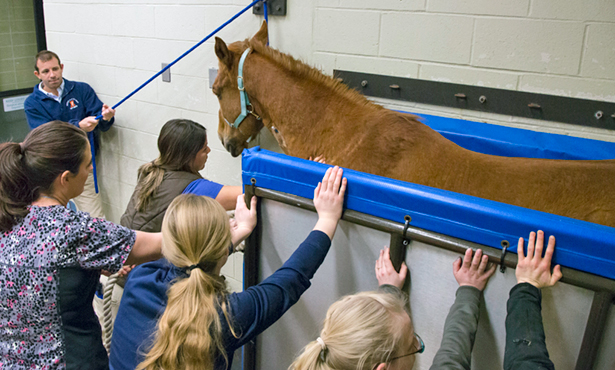 It is widely recognized that colic is one of the most common presenting complaints for veterinary care and a leading cause of death in adult horses, second only to old age and musculoskeletal injury. Overall, surgical intervention is indicated in 2% to 10% of colic episodes evaluated by a veterinarian. The decision to elect referral and surgical intervention is strongly influenced by perceived potential for a positive outcome, in addition to other factors.

Over the past 10 years, short-term survival rates after colic surgery (generally defined as survival to hospital discharge) have been reported to range from 32% to 100%, with an average around 80%. It is important to note that most of these studies report survival rate based only on horses that were recovered from general anesthesia, which can provide an overly optimistic picture of survival in the broader patient population. Additionally, reports with very high post-operative survival rates typically come from hospitals serving very dense equine populations, and it has been suggested that data from these referral centers may not reflect outcomes from referral centers serving more widely dispersed client bases.

We set out to determine outcomes and identify risk factors associated with non-survival in the population of horses presenting to the University of Illinois for abdominal surgery related to colic.

Medical records of horses undergoing exploratory laparotomy for colic at the Veterinary Teaching Hospital over the past 10 years were reviewed retrospectively. Multivariate logistic regression was used to determine risk factors associated with “survival to anesthetic recovery” and “survival to hospital discharge.” Over 80 variables were analyzed, including signalment, preoperative assessment, surgical findings and interventions, pre- and intra-operative blood gas values, anesthetic recovery, and post-operative complications.

We identified 254 cases that met the inclusion criteria. Ninety-eight cases (39%) were euthanized intra-operatively. One hundred and fifty-six horses (61%) survived to anesthetic recovery. One hundred and thirty-one horses survived to discharge (52%). If only horses that were recovered from anesthesia were considered, survival to discharge was 83%. This is consistent with previously published reports from other institutions around the world.

Interestingly, we found that horses with relatively short duration of clinical signs (3 to 6 hours) were less likely to be recovered from anesthesia compared with those with a longer duration of clinical signs. This is likely because horses with more severe disease are identified and referred expediently. Horses with a strangulating lesion diagnosed at surgery were also less likely to be recovered from anesthesia; this is most likely due to a combination of poor prognosis (including finding a non-resectable lesion) and financial constraints related to the need for a resection.

In horses that were recovered from general anesthesia, those with an increased heart rate at presentation (median 72 beats/min for non-survivors compared to 52 beats/min for survivors), performance of a jejunocecostomy or jejunoileostomy, and post-operative colic were less likely to survive to hospital discharge. These risk factors for non-survival are similar to those reported previously by other referral centers, despite perceived differences in our patient demographics.

This study did not include horses for which exploratory laparotomy was indicated, but euthanasia was elected in lieu of surgical intervention. As owner finances often play a large role in the decision for euthanasia, we encourage early and open communication regarding the costs of referral care, especially in cases where surgical intervention is anticipated. When surgery is an option, prompt referral is always recommended to maximize the possibility of a positive outcome.

A University of Illinois veterinarian is available 24/7 to discuss cases and can provide general estimates for care based upon on-farm evaluation.