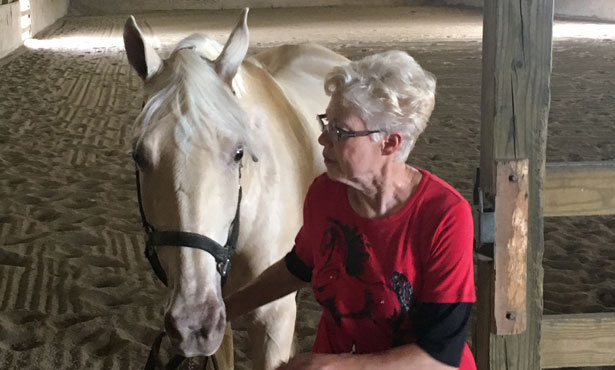 Is it true blondes have more fun? For Miss Clairol—better known by her pet name, “Blondie”—an 11-year-old Palomino show horse that recovered from a devastating leg injury to compete again at a championship level thanks to surgeons at the University of Illinois Veterinary Teaching Hospital, every day is a playful celebration of life.

“Ninety-five times out of 100, her owners would have killed her,” says Blondie’s owner, Sandy Bradfield of Urbana, reflecting on the January 2014 freak accident that shattered the horse’s left hind ankle in five places. “I never thought I’d ride her again.

“It’s a miracle. I throw my leg over a miracle every day I ride her.”

Euthanasia is typically indicated when a horse suffers an injury as severe as Blondie sustained. The animal may not awake from anesthesia if surgery is performed, “and there’s always a chance if they do, they’ll lose their mind,” says Bradfield, a horse trainer for more than half a century. Plus, there is significant risk of infection or laminitis, a crippling inflammatory condition of the tissues in a horse’s hoof.

“These horses go from being asleep on the operating table to having to use their repaired limb within 24 hours,” explains Dr. Santiago D. Gutierrez, clinical assistant professor and equine surgeon at the hospital. “You fracture your leg, your doctor tells you to stay in bed four to six weeks.”

Dr. Gutierrez led a team of equine surgeons, surgery residents, and a surgical intern, with several veterinary students, in the 3½-hour procedure, in which two stainless steel plates and 11 screws were inserted in Blondie’s leg. Dr. Gutierrez says he sees fractures this serious “once every three or four years. That’s how rare it is.”

Bradfield immediately knew something was wrong when, while Blondie was playing at her home on Urbana’s Fox Hollow Farm, she planted a hind leg to whirl around and her hoof stuck in the dirt. “It sounded like you’d broken a limb off a tree,” Bradfield remembers. “It went CRACK! You knew it was bad.” 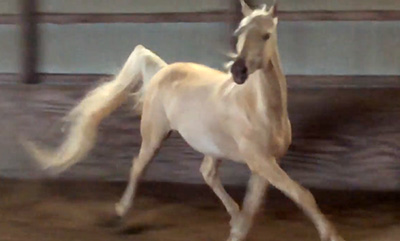 “I showed her last year and we won almost all the classes I had her in except State Fair—and that was my error,” says Blondie’s owner, Sandy Bradfield.

Yet, to Bradfield’s amazement, “she walked from the arena into her stall on three legs, never refused to walk. She had to walk out of the barn, load onto the trailer, and behave herself. And when we got to the University, she backed out of the trailer and walked all the way into the hospital, even though she couldn’t put any weight on it at all.

“It took us a couple of days to decide [after multiple fractures were confirmed] because surgeries like this are always risky,” Bradfield admits. “But I couldn’t kill her. You could tell this mare trusted us, and she had not given up. So we decided to go ahead.”

A champagne-colored Palomino American Saddlebred mare, Blondie has beaten the odds her entire life. She won every halter class event in which she competed prior to the accident except one, winning the Illinois State Fair two years in a row—particularly impressive feats given that Bradfield maintains there is inherent color prejudice in equine judging.

“Chestnut brown and black are the norm, gray is not terribly unusual,” Bradfield says. “But this [color] is very unusual, and the issue is, you’re going to see her. If there’s 50 horses out there and this horse, you can’t miss her. A lot of times, they can’t live up to the expectations.”

Because of icy conditions following Blondie’s surgery, “we couldn’t bring her home,” says Bradfield. “She literally was in the hospital for two months.” During that time, Bradfield and her husband, Rex, visited Blondie twice a day. “We wanted her to know that we were still in her life, that we hadn’t abandoned her,” she explains.

The time, expense, and commitment paid off: After six months on stall rest and slow, patient rehabilitation from Bradfield, today Blondie is almost completely back to normal. “I showed her last year and we won almost all the classes I had her in except State Fair—and that was my error,” she says.

“We were lucky to have owners who were very compliant and a horse that was pretty smart,” notes Dr. Gutierrez. “And fortunately, we didn’t run into any major complications. It was one of those cases where everything went the way it was supposed to. That’s why we ended up with a good outcome.”

“I felt their surgeons were extraordinary,” praises Bradfield. “And Blondie has had a complete personality change. Typically Saddlebreds are nervous, but she was just a nutcase, bucking and kicking in her stall.

“After all this happened, it’s like she understands that she has to listen and has to think. She’s really, mentally, a better horse.”