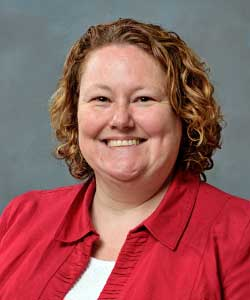 Dr. Mahoney attended Smith College (Northampton Mass) and graduated from Bates College (Lewiston ME) with a BA in Biology. She worked as a research assistant at Harvard Medical School for two years before returning to graduate School to get a dual Ph.D. in Zoology and Ecology, Evolutionary Biology, and Behavior at Michigan State University (2003, East Lansing, MI). Dr, Mahoney moved to the University of Michigan for her post-doc where she participated in the Reproductive Sciences Program and Toxicology Training Program. In 2004 Dr. Mahoney was appointed an Assistant Research Scientist in the Department of Psychology. Dr. Mahoney became an Assistant Professor in the Department of Comparative Biosciences (formerly Veterinary Biosciences) at the College of Veterinary Medicine in May of 2006.

I believe that learning is enhanced when students are interested in the subject they are studying; and once they are engaged in the material then they can hone their critical thinking skills. I want the students to feel that they are a part of the classroom experience, and I think they will learn better if they are involved in talking and analyzing the material rather than passively listening to a lecture. To that end I work hard to infuse energy into the classroom and to convey my enthusiasm for the topics I teach. My ultimate goals are that first students will know the information and not just recognize it and second they will be able to utilize their knowledge in the analysis of novel information.