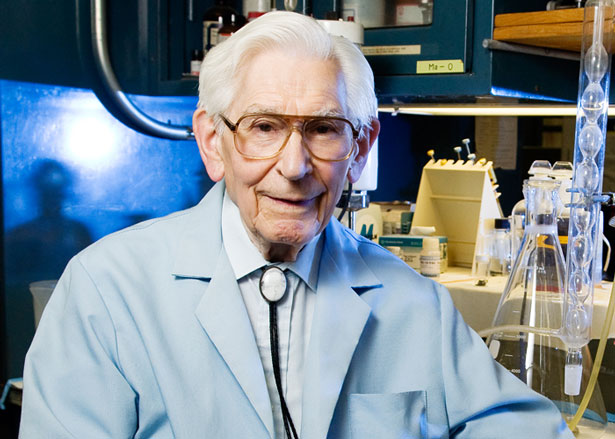 Low-density lipoprotein (LDL), the “bad cholesterol” that doctors consider a sign of potential heart disease, is merely a marker of a diet lacking all of the essential amino acids, says University of Illinois comparative biosciences professor Fred Kummerow, 99, a longtime opponent of the medical establishment’s war on cholesterol.While writing about the causes of heart disease for the journal Clinical Lipidology, Kummerow made a simple observation that “connected the dots” for him, he said. He noticed that, unlike other cholesterol-carrying molecules in the blood, LDL includes only a single apo-protein, called ApoB. And ApoB lacks the amino acid tryptophan.“LDL is not a marker of heart disease,” Kummerow said. “It’s a marker of ApoB.” And ApoB is a marker of a lack of tryptophan, he said.Numerous studies have shown that the other cholesterol-carrying components of blood plasma – high-density lipoprotein (HDL), very high-density lipoprotein (VHDL), very low-density lipoprotein (VLDL) and chylomicrons – all include two or more Apo-proteins, Kummerow said. HDL, for example, is made of ApoA-I and ApoA-II, which together are made up of all of the essential amino acids (those that cannot be synthesized in the body and so must come from the diet). The reason HDL is associated with better heart health is that the body produces HDL when it obtains all the essential amino acids from the diet, including tryptophan, Kummerow said. High HDL levels signal a healthy diet, he said. And high LDL levels “mean you’re not getting the diet you need.”People who get much of their protein from grains such as wheat, rice and corn may lack adequate supplies of tryptophan unless they also eat legumes, which provide the missing amino acid in adequate amounts, Kummerow said.Doctors who advise their patients to avoid cholesterol-rich foods may actually be undermining their health, Kummerow said. Turning patients away from foods such as eggs and other animal products that are rich in essential amino acids may actually raise their LDL levels, he said.  Diana Yates, Life Sciences Editor | 217-333-5802; diya@illinois.edu