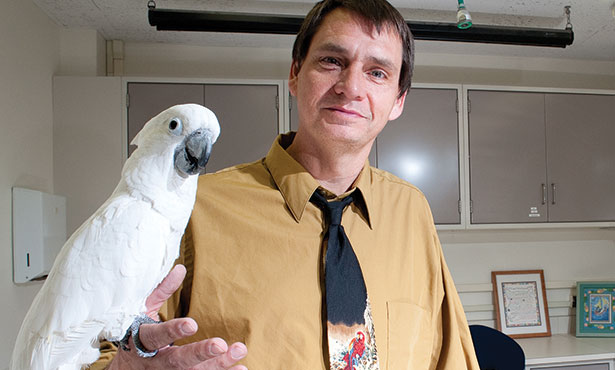 As avian veterinarians, we are often called upon to perform grooming procedures—most commonly trimming of the beak, wings, and nails—on pet birds. While these may seem to be simple technical tasks, there can be undesirable consequences when they are done incorrectly. In fact, the very need for these procedures should be critically evaluated. Wing trims in particular can cause devastating damage in some birds.

Beak trimming (or contouring) is done for a few reasons. The beak of normal birds should not require trimming. While some mild flaking of outer layers of the beak may be normal, excessive thickening or overgrowth of the beak may be an indication of a problem. The veterinarian should have a mental image of the normal beak shape for various species. Beaks varying greatly from this shape may benefit from contouring.

Beak problems may arise from disease, poor nutrition, structural malocclusion, or lack of adequate wear. In the case of disease or poor nutrition, the beak keratin is qualitatively altered.

It is advisable to require an examination before performing a beak trim on a new patient. This is partly to determine the cause of the overgrown beak and correct it, and partly to assess the bird’s ability to tolerate the stress of the beak trim. The quality and texture of the beak keratin, and the length and the occlusion of the rhinotheca and gnathotheca are important parameters to evaluate. The clinician should refer to normal beaks for each species to determine the normal shape.

When trimming is required or when an owner wants the beak smoothed for cosmetic purposes, a hobby drill with a grinding stone tip is used to shape the beak. It is important to assess the inside margins of the beak as well as the exterior, particularly along the occlusal ridge on the inside edge of the rhinotheca. In birds with malocclusion, this ridge will often be slanted. This ridge should be reshaped to make it level during beak trimming.

On the gnathotheca of larger birds, the occlusal edge should have visible Herbst corpuscles, which are pressure sensors. When excessive keratin builds up over these structures, birds have little sense of touch with the beak. Conversely, care should be taken not to take too much off since severe bleeding can occur. Also, many parrots will try to feel the instrument with their tongue, causing trauma to the tongue.

Blunting the beak to reduce pain of biting birds is ineffective; it just changes the handler’s injury from a puncture wound to a crushing wound, which is often worse.

Sharp toenails on a bird are normal but can be quite uncomfortable to the handler, especially with large birds. Also, excessively long nails can be easily caught in cages, toys, carpets, or other objects, leading to injury. Trimming nails, therefore, is important for bird and owner.

The frequency of trimming depends on diet, activity level, and perch sizes and materials. Larger perch diameters favor natural wear of the nails. Sandpaper perch covers should not be used. Very tame birds may allow the owner to file the nail tips with an emery board. Depending upon the size of the bird, human nail clippers, dog nail trimmers, scissors, or a grinding tip on a hobby drill can be used to cut or grind the nails. This is usually a two-person job with one person restraining the bird and the other performing the pedicure.

Styptics should be available in the event of bleeding, which will occur if the nail is cut too short. Styptics will not work if blood is flowing freely so the flow must be stopped by pinching the toe on the sides with the fingers. The blood can then be cleaned off and the styptic applied to the surface.

Grinding tools take off the nail more gradually and produce some heat so that the nail is cauterized as it is cut. The owner should be informed that the bird might have a poor grip on perches for a few days.

Clipping of the wings is performed to restrict the flight of the bird for safety and behavioral purposes. In captivity, birds with full flight often fly into windows, mirrors, and ceiling fans, land on dangerous surfaces such as the top of doors, toilets, boiling water pots etc., or simply escape. A trimmed bird may be easier to train initially than a fully flighted bird. Other injuries such as broken blood feathers, sternal splits, tail lacerations, and chipped beak tips occur more frequently in clipped birds. Clipped birds cannot be shown in some shows. It is more difficult for wing-trimmed birds to get adequate exercise, and if the wings are trimmed too young, the bird may not learn flight adequately. The risks and benefits of wing trimming should be carefully considered before proceeding.

Many methods of wing clipping have been advocated but the author’s preference is to take the two to seven outermost feathers on both sides under the coverts. This reduces the power of the bird’s flight without causing a lack of control. When a single wing is clipped, more injuries occur as a result of crashes. Leaving the outermost one or two feathers on each side is somewhat more cosmetic but may not adequately restrict the flight in strong fliers. It may be advisable to test fly the bird prior to sending it home.

Care must be taken to examine the wing for blood feathers. These will be shorter than adjacent feathers and the shaft will be purplish (dark colored feathers) or pink (light colored feathers). Blood feathers should not be cut or significant bleeding may occur. If this is inadvertently done, the bleeding should be controlled by pinching the shaft closed with the fingers. The feather beside the blood feather should also be left long so the growing shaft has some protection. On average, wing trimming will be required every four months to maintain a flightless state.